Goulash (Hungarian: gulyás) is a soup or stew of meat, noodles and vegetables (especially potato), seasoned with paprika and other spices. Originating within the historical Hungarian ethnic area, goulash is also a popular meal in Scandinavia and in Central and Southern Europe. The name originates from the Hungarian “gulyás” [ˈɡujaːʃ]. The word “gulya” means “herd of cattle” in Hungarian, and “gulyás” means “herdsman”.

The word gulyás originally meant only “herdsman”, but over time the dish became gulyáshús (goulash meat) – that is to say, a meat dish which was prepared by herdsmen. Today, gulyás refers both to the herdsmen, and to the soup. From the Middle Ages until well into the 19th century, the Puszta was the home of massive herds of cattle. They were driven, in their tens of thousands, to Europe’s biggest cattle markets in Moravia, Vienna, Nuremberg and Venice. And the herdsmen made sure that there was always one “sickly” creature that had to be slaughtered along the way, the flesh of which provided them with a magnificent gulyáshús.
In Hungarian cuisine, traditional “gulyásleves” (literally “goulash soup”), “bográcsgulyás”,pörkölt, and paprikás were thick stews made by cattle herders and stockmen. Garlic, tomato, caraway seed, bell pepper, and wine are optional. One may alternatively prepare these dishes as soups rather than stews. Excepting paprikás, the Hungarian stews do not rely on a flour or roux for thickening. 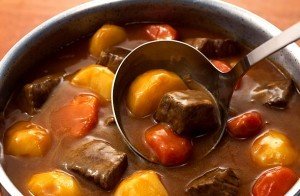 Goulash can be prepared from beef, veal, pork, or lamb. Typical cuts include the shank, shin, or shoulder; as a result, goulash derives its thickness from tough, well-exercised muscles rich in collagen, which is converted to gelatin during the cooking process. Meat is cut into chunks, seasoned with salt, and then browned with sliced onion in a pot with oil or lard. Paprika is added, along with water or stock, and the goulash is left to simmer. After cooking a while, garlic, whole or ground caraway seed, or soup vegetables like carrot, parsnip, peppers (green or bell pepper), celery and a small tomato may be added. Other herbs and spices could also be added, especially chili pepper, bay leaf and thyme. Diced potatoes may be added, since they provide starch as they cook, which makes the goulash thicker and smoother. A small amount of white wine or wine vinegar may also be added near the end of cooking to round the taste. Goulash may be served with small egg noodles called csipetke. The name Csipetke comes from pinching small, fingernail-sized bits out of the dough (csip =pinch) before adding them to the boiling soup.

Bean Gulyás – Omit the potatoes and the caraway seeds. Use kidney beans instead.

Csángó Gulyás – Add sauerkraut and rice instead of pasta and potatoes.

Betyár Gulyás – Use smoked beef or smoked pork for meat.

Likócsi Pork Gulyás – Use pork and thin vermicelli in the goulash instead of potato and soup pasta. Flavour with lemon juice

Mutton Gulyás or Birkagulyás – Made with mutton. Add red wine for flavour.