Government lied to the EU about the Pegasus spyware scandal?

I am contacting you in connection with your fact-finding delegation’s visit to Hungary between 29 September and 1 October 2021 in order to assess the freedom of the press and the scientific community as well as the respect for minority rights and the rule of law in Hungary.

The written report on the delegation’s findings was released a few days ago and it states that the Hungarian use of the Pegasus software was also discussed multiple times during your three-day visit.

The National Security Committee of the Hungarian National Assembly conducts the parliamentary oversight of the operation of the Hungarian intelligence services under the effective Hungarian law. As the chairman of the committee, I attach particular importance to my homeland’s sovereignty, integrity and the inviolability of its rule of law.

That’s why I was highly concerned when I read your report stating that Justice Minister Judit Varga had informed the delegation regarding the Pegasus affair that “it was under a parliamentary inquiry led by the opposition” in Hungary.

In stark contrast with the above statement, the truth is that my motion to initiate a fact-finding inquiry in compliance with the relevant provisions of Act CXXV of 1995 of Hungary on the national security services was rejected twice by the pro-government MPs who form the majority in the National Security Committee: first on 20 September 2021, and then a second time on 18 October 2021.

Had the representatives of Judit Varga’s party passed my motion either time, the members of the inquiry committee would have been able to oblige any person, body or organization in possession of any files, data or other information relevant to the fact-finding inquiry, to cooperate with the investigation.

Due to the obstruction of the pro-government MPs, we have been unable to conduct such an inquiry to this day, thus we have no opportunity to investigate this matter. Therefore, if Ms Varga indeed informed you to the effect she did according to the report, i.e., that an inquiry committee was looking into the Pegasus affair, then you have been misled. 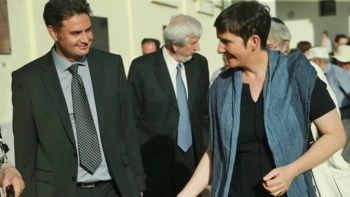