The demonstration, called “We are the majority! – Protest for democracy”, started in front of the opera house on Andrássy Avenue. Protestors made their way to Kossuth Square, in front of parliament, to hear speeches. 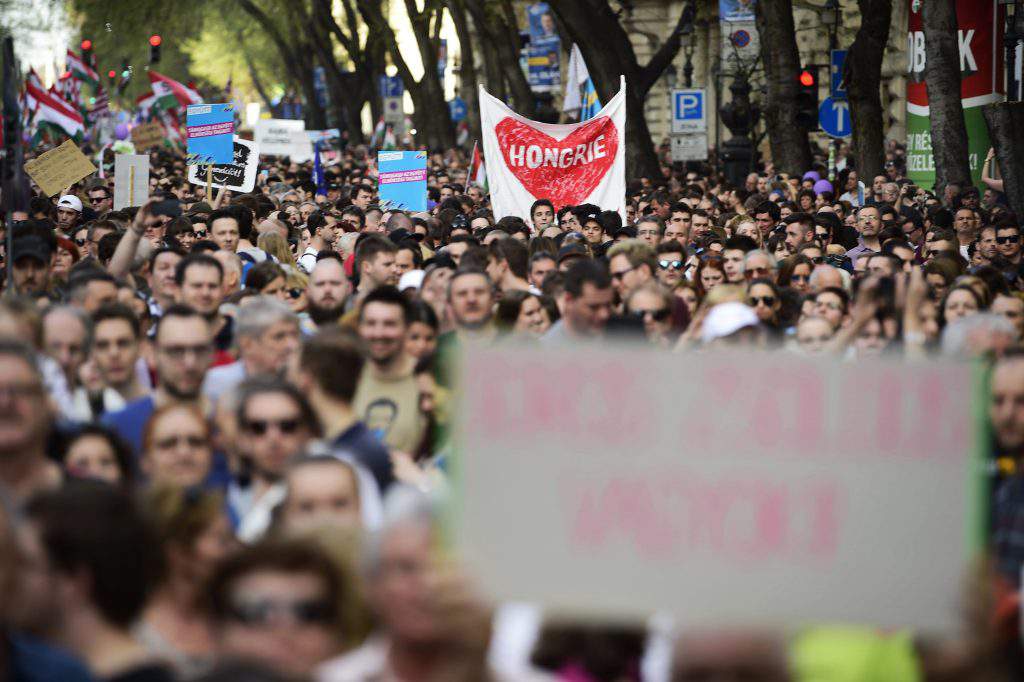 The organisers, who announced the demonstration on Facebook, wrote that “the election system of Fidesz and the government’s campaign of hate have squeezed the majority into a one-third minority”. They called for a recount of votes, a free press, a new election law and for the “opposition not to fight with itself”.

A number of opposition parties were represented at the demonstration.

The protestors waved the national colours, European Union flags, the stripes of the House of Árpád and banners they made themselves.

When the protestors at the front of the demonstration turned onto Bajcsy-Zsilinszky Street from Andrássy Avenue, the last ones were starting out from Liszt Ferenc Square, a distance of some 800 metres. Arriving in front of the parliament building, the crowd filled Kossuth Square, overflowing into neighbouring streets.

Speakers at the square called for solidarity and unity among democrats in the interest of freedom, democracy, the rule of law and freedom of the press. They also urged joint action by opposition parties to unseat the government.

Balázs Gulyás, who organised an earlier demonstration against a proposed tax on internet use, said Fidesz had become “a party of lies, hate, fear and stolen assets”.

He said the “playing field was terribly tilted” during the election, adding that if Fidesz had any honour, it would dissolve parliament and call new elections.

Péter Márki-Zay, the recently elected mayor of Hódmezővásárhely, in south-eastern Hungary, who ran as an independent jointly supported by opposition parties, urged the protestors in a letter to pull together for a Hungary without corruption and without fear.

Gergely Homonnay, a writer, journalist and teacher, called for a new electoral system and demanded to recall Chief Public Prosecutor Péter Polt so that corruption cases can be properly investigated.

Viktor Gyetvai, the organiser of the Independent Student Parliament demonstrations, said the demonstrators were there to say no to oppression.

This movement “is the beginning of a process, which means hope” that young people do not have to leave the country, but can grow up here, establish families, live in peace and democracy.

The demonstrators said they would continue to protest to see their demands met.

Demonstrations were organised in Győr, in northwest Hungary, as well as in London and Berlin to coincide with the one in Budapest. There were around 150 demonstrators in Győr. About 300 people participated in the demonstration in London, near Downing Street. Some 120 people protested in front of the Hungarian embassy in Berlin.