“Cooperation between Hungary and Tunisia is important from both an economic and security perspective”, Minister of Foreign Affairs and Trade Péter Szijjártó said in a statement to Hungarian news agency MTI on Monday.

Mr. Szijjártó told the press that during his visit to Tunis on Monday he had met with the Tunisian President and Foreign Minister, and later will also be holding meetings with the Ministers of Transport, Agriculture and Higher Education, after which he will meet with the directors of Tunisia’s largest companies and with officials from the Chamber of Commerce an Industry.

“Cooperation between Hungary and Tunisia is extremely important from both an economic and security perspective. From a security perspective because while there is peace and stability in Tunisia “we can be sure that hundreds of thousands or millions of illegal immigrants will not overrun Europe from this stretch of North African coastline”, and although the people of Tunisia live their lives under a major threat of terrorism “they are holding up for the moment”, he stressed, adding that it would also be in Europe’s interests for the country to remain stable in the long term, because while this is the case “the European Union can count on one less danger from the south”. 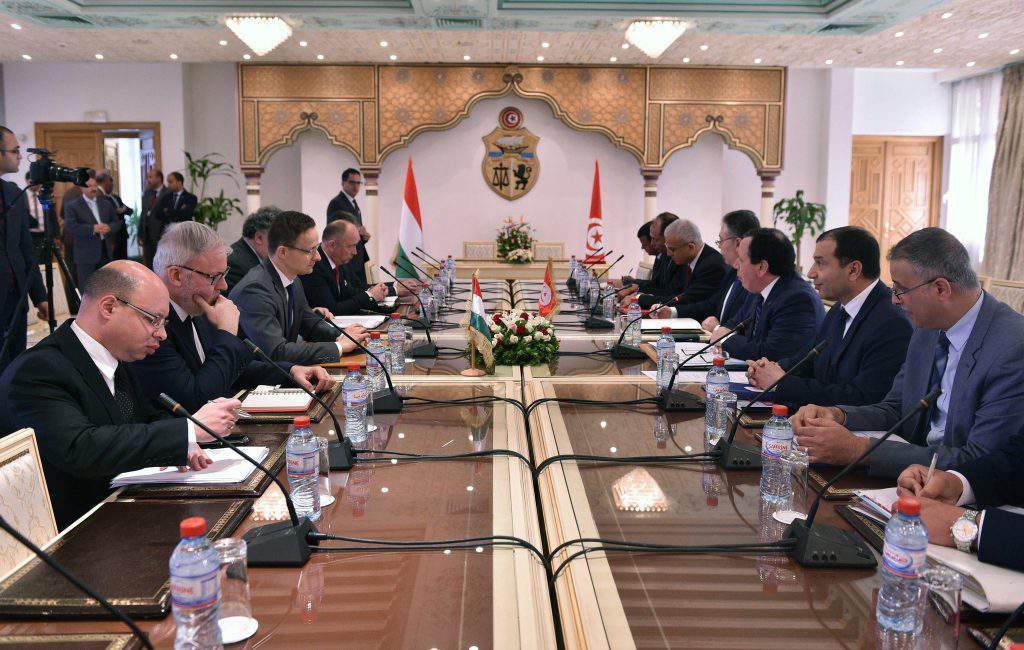 Mr. Szijjártó highlighted that for this reason on Monday the parties had signed a bilateral agreement on Interior Ministry and anti-terrorism cooperation according to which Hungary will be sharing its border control and border security experiences with Tunisia. “A Tunisian delegation has already visited Hungary’s southern border, in addition to which a Tunisian anti-terrorist delegation has also visited Hungary, and a Hungarian anti-terrorist delegation has visited Tunisia”, he recalled. The Hungarian Foreign Minister told reporters that in future the two countries would be tightening their border security and anti-terrorist cooperation and Hungary will be providing Tunisia with the assistance required for it to defend its border with Libya, which is in the interests of both Hungary and the European Union.

Mr. Szijjártó also spoke about the fact that with regard to economic cooperation Tunisia had “picked Hungary as its strategic economic partner in Central Europe”, thanks to which bilateral trade flow increased by 18.5 percent in January. “Hungary’s Eximbank has opened a 255 million euro credit line to facilitate cooperation between Hungarian and Tunisian enterprises, which affords major opportunities on the Tunisian market to Hungarian companies operating primarily within the fields of agriculture, the food industry and water management”, he added.

The Minister also said that education relations between the two countries are extremely close and the annual number of Tunisian students being given scholarships to study in Hungary has just been increased from 100 to 150.

“Good news for Hungarian tourists is that from May of this year five charter flights-a-week will be taking off between Monastir and Budapest as opposed to the current single flight, and negotiations are also underway on launching a scheduled direct air passenger route between the two capitals”, Mr. Szijjártó said.

The Hungarian Foreign Minister also spoke about the fact that Hungary is one of the EU member states that supports the fastest possible conclusion of negotiations on a free trade agreement between the EU and Tunisia. “Hungary also supports the fact that the European Union should bring in further financial instruments to ensure the continued financial support of Tunisia until 2020, because if the EU funds Tunisian structural reforms then it will be easier to maintain stability in the country”, he pointed out.