Zagreb, April 12 (MTI) – Bilateral relationships, economic cooperation, energy security and issues related to the European Union were among the topics discussed by Hungarian President János Áder and his Croatian counterpart Kolinda Grabar-Kitarovic in Zagreb on Wednesday. 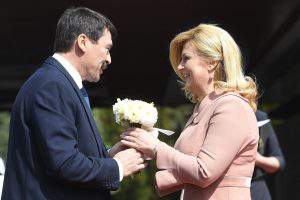 As a part of the two-day visit to Croatia at the invitation of his counterpart, Áder and Grabar-Kitarovic are to address a plenary session of parliament together. The presidents are also holding a joint press conference later on Wednesday.

Áder last paid a visit to Croatia in August and September last year. The Croatian president then visited Hungary later in September.

The two countries’ relationships were recently strained by issues surrounding the migration crisis of 2015. The issue of Hungarian oil and petrol company MOL’s shares in Croatian petrol company INA, which the Croatian government intends to buy back, has also darkened bilateral ties.

The migration route across the western Balkans has to be kept closed and the European Union’s external borders must be kept safe, Hungarian President János Áder said at a joint press conference with his Croatian counterpart.

Grabar-Kitarovic said that the two countries have to cooperate in order to counter the effects of tightened EU regulations regarding border control on the Schengen border. Some 3.5 million tourists and 900,000 vehicles cross the border of the passport-free Schengen zone between Hungary and Croatia every year, she said. Tightened border control threatens to cause serious congestions, which the countries should work together to prevent, she said.

Speaking after talks with Kolinda Grabar-Kitarovic as part of a two-day visit to Croatia, Áder highlighted transport and energy safety as important issues of the talks.

Áder highlighted the importance of developing transport ties between Hungary and Croatia, such as railway and road networks.

Áder also mentioned the completion of the missing sections of the M6 motorway as an important task. Hungary plans to finish building the motorway within the next three years, Ader said. He added that if Croatia were to be as effective in its work on the motorway as it had been on previous motorway construction projects, the motorway connecting Budapest and northern Sarajevo could be completed “within the foreseeable future”.

On the topic of energy security, Áder noted the construction of an LNG terminal on the island of Krk, the matter of enabling reverse gas flows through the Hungarian-Croatian interconnector as well as the renovation of the Adriatic pipeline.

Áder said talks had also touched on a bilateral initiative concerning hydrocarbon mining and exploration on the Hungarian-Croatian border.

Áder said Hungary would work with Croatia to make sure that traffic at the border could proceed undisturbed.