New stadiums will be built or reconstructed, as well as the projects currently in progress receive additional funds.

The judgement of football was always mixed in Hungary. Given its decades-long unsuccessfulness, many people say that supporting football is pointless. Most professional football players’ salary is ridiculously high compared to their results. On the other hand, others point out that without sufficient funds there will be no success for Hungarian football. At the same time, there is no understanding in what should be supported by the government: whether the youth academies, the professional teams or the infrastructure should receive extra money. In this article, I will examine the government support of the latter, namely the stadium building and reconstruction projects.

First, let’s start with a little historical overview. In 2000, when Orbán Viktor was prime minister for the first time, there was a plan for reconstructing stadiums. For a three years run, with HUF 12.7 billion government support 38 stadiums would have been reconstructed. The reconstructions were important because Hungary planned on hosting the Euro Cup in 2004 ( eventually Portugal got the right). The  project was mostly unsuccessful, only a half of the planned reconstructions was finished. In the following years, only Győr and Miskolc managed to renovate their stadiums.

The current wave of stadium reconstructions started under the second prime ministry of Orbán Viktor. What really boosted the process was the possibility to support public benefit organisations (such as theaters or sort clubs) with the corporate income tax( TAO). From the TAO money football received the biggest part. The total amount that was allocated to football was HUF 6 billion in 2012, compared to the HUF 0,68 and 0,48 billion for basketball and handball. Within the football sector, Felcsút received HUF 2,8 billion which is a way ahead of Debrecen’s  HUF 0,52 UTE’s 0,33 or Disgyőr 0,28 billion. FTC, Honvéd and győr has got even less money. It is important to note, however, that from that list only Felcsút, FTC and Debrecen will have a completely new, modern stadium. Now it is time examine the the stadium reconstructions individually. 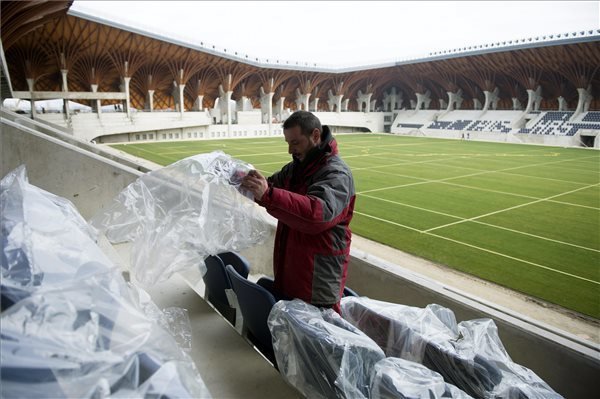 A small town in Dunántúl (Transdanubia), with barely 1500 inhabitant. Still a  new stadium will be built here, for about HUF 3,8 billion, with the capacity of 3500 people. The arena will serve as home ground for Puskás Akadémia, a team which used to be a youth academy for Videoton FC, but after winning the second league of Hungary, they had the right to join the top division. (Of course, this would be quite impossible given the fact that Puskás Akadémia was the reserve team of Videoton, so they had to start the 2013/2014 season as an individual team.) The cost does not seem to be extremely high, although the cost of one seat will be HUF 1,085 million, which is considerably more than at other stadiums. Truth be told, the mini stadium will be of top class: it will have an UEFA rating of four, thus, it will be suitable for international matches. Makovetz Imre and his students made the certainly spectacular plans. The stadium will be finally put into use in April.

DVSC is a quite successful Hungarian team, with 18 gold medals in leagues and cups in the last 16 years. The arena of the team, the Nagyerdei Stadion, was opened in 1934. DVSC played in it until 1993, when they moved to the arena at Oláh Gábor street. As the years passed, the old stadium completely ruined, and became unsuited for playing matches in it. In 2012 mayor Kósa Lajos announced that the stadium will be completely rebuilt. The works started in the january of 2013, and will be finished in the spring of 2014. The stadium itself will have a total capacity of 20,000 people and UEFA rating four. The total cost is about HUF 12.5 billion, for which the government allocated HUF 3 billion in 2012 and 9,2 in 2013. The cost of one seat will be only HUF 625,000 .

As one of the most popular football clubs in Hungary, if not the most, FTC also received government support for  a completely new stadium. Their stadium was first built between 1910-1911, was rebuilt  in the 1970s. Now the Albert Flórián Stadion is once again under construction. The capacity will be increased by about 4,000 people (from 18,100 to 22,000). The total costs are HUF 13,5 billion (6,9 billion in 2013). This way one seat will cost slightly less than the ones in Debrecen,about HUF 614,000 .
Mezőkövesd

Mezőkövesd Zsóry FC is a newcomer to the top league, nonetheless, they also received some government funds to reconstruct their stadium. The total capacity will be about 5,000 people. The team received HUF 400 million of support both in 2013 and 2014.

In the next year three new stadiums will be built or reconstructed. The first on will be in Miskolc for DVTK. This arena will be a modernized, rebuilt ground with the capacity of 15,000. HUF 3,5 billion government support was allocated to this project for  two years.

Haladás from Szombathely will also have a new stadium. There will be HUF 9,25 billion government support for a facility with enough room for 10,000 people. From this money, facilities will also be built for other purposes, such as handball, futsal, chess and so on.

Last but not least a new UEFA rating four stadium will be built in Székesfehérvár for Videoton. According to the plans, the total capacity will be 14,000 people, which is not enough to host international matches, however, the stadium will have roof over the pitch. The state allocated about HUF 9 billion for this project for two years.

Finally, the new Puskás Stadium is included in the budget as well. For this project, HUF 128 billion was assigned for four years. The money should cover both the football arena and facilities for the new National Olympic Center (Nemzet Olimpiai Központ). A  National Program for Stadium Development (Nemzeti Stadionfejlesztési Program) is included as well, for which HUF 38,685 billion was allocated for renovations of 27 first and second league stadiums.