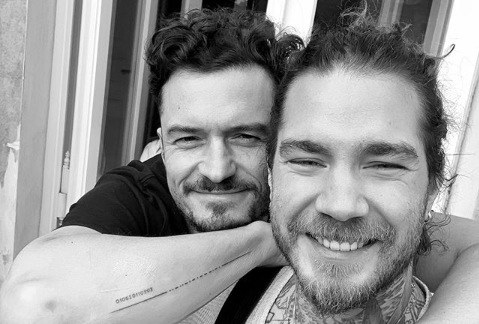 Orlando Bloom got his newest ink, in honour of his son, Flynn, done by Hungarian tattoo artist Balázs Bercsényi.

The famous actor decided to get nine-year-old son Flynn’s name tattooed on his arm in Morse code, as well as the boy’s time and date of birth. He confirmed the meaning of his body art in an Instagram comment, reported the Daily Mail. His choice of artist was none other than a Hungarian tattooist, Balázs Bercsényi.

Balázs was born in Pécs, Hungary, but his path took him to London. In an interview, he said he did not finish college and soon moved to the UK with a friend of his. They went their separate ways after a few months, and Balázs ended up in London, bartending.

He stumbled upon a Hungarian tattoo artist who saw Balázs’s potential, and so at 20, he started an apprenticeship in London.

He found himself back in his hometown and continued his work as a tattoo artist. He inked Hungarian celebrities, such as Roland “Wolfie” Farkas, a member of Punnany Massif, Krisztián “SP” Éder, Regina Dukai, Fluor Tomi, Bence Istenes, and many more. He moved to Budapest due to the many musicians requesting his work.

One day, he saw that a tattoo studio in New York was looking for artists, and so he sent in his portfolio and became part of the world-famous Bang Bang crew.

He has since inked not only Hungarian celebrities but international stars as well. Lewis Hamilton, Winnie Harlow, and Devon Winsor, to name a few, all wear his art on their bodies.