In his address at the opening ceremony, Szijjártó said that the new office would serve Hungarians living in or visiting the United Kingdom.

Szijjártó referred to Britain as a “friend and ally” and voiced regret over that country’s leaving the European Union, but added that

The EU has “much to lose” with Brexit but Hungary will make all efforts to continue “in the closest possible ties” with the UK, he said. 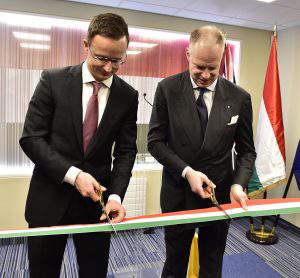 Some 10,000 Hungarians live in and around Edinburgh and in the past they had to travel to London to arrange Hungarian official matters, Szijjarto told MTI.

The new consulate also will be tasked with helping the development of Hungary-Scotland relations, he said.

“Our history has several meeting points and we Hungarians have always had great respect for the Scottish people,” Szijjártó said.

The economic strengthening of this cooperation is now also visible, with Scottish exports to Hungary nearly reaching 100 million pounds, he said.

Additionally, oil and gas company MOL has carried out significant investments in Scotland by opening a local office in Aberdeen and getting involved in seven research and exploration concessions on the shores of Scotland, he said.

Meanwhile, Skyscanner, a company operating a platform for finding cheap airline tickets founded in Scotland, has set up a development hub in Budapest and has a “serious operation” in Budapest, he added.

He also noted close cooperation in education and a Hungarian lector’s office has been set up at the University of Glasgow.

Szijjártó said he had earlier met Jaguar Land Rover management in Birmingham and reviewed developments linked to a planned engineering development center in Budapest. The minister said he had informed them that the Hungarian government supported electromobility and autonomous driving technology.

JAGUAR TO SET UP NEXT DEVELOPMENT CENTRE IN BUDAPEST

There is some uncertainty about exactly how many alcoholics there are in Hungary. The…
As Adrian Phillips, a destination expert of the famous British The Telegraph puts it,...
The leaves on the trees are not the only things that change during the autumn. Your…
Sponsored...
We and our partners use technologies, such as cookies, and collect browsing data to give you the best online experience and to personalise the content and advertising shown to you. I accept
Privacy & Cookies Policy