Interview: How a Hungarian humanitarian group explores Africa with a Trabant

Zsolt Vadász, the founding member of the Geonauta Friendship Society, talks about the group’s purpose, their adventures in Africa, and what they are trying to achieve with everything they do, no matter how strange it might seem to others.

Daily News Hungary wrote about Zsolt Vadász and his expeditions before. He is known for travelling around the world with a 30-year-old Trabant, raising awareness of environmental protection and sustainability.

Crazy idea: Hungarian guys to cross the desert with a Trabant

What it is all about

Zsolt Vadász is a founding member of the Geonauta Friendship Society, which is basically a group of friends who, at first, went hiking and rock climbing together, and they slowly formed into this amazing humanitarian group, aiming to raise awareness of the harmful ways of today’s consumer society and emphasize the importance of protecting our environment. They organise hiking tours and regular trash pick-ups, and they even build artificial nests for endangered birds and ring them if necessary.

A few years ago the group decided to show the world that they do not need an expensive new car to reach any, and I mean literally any point of the world. They proved that a 30-year-old, very simple car with low fuel consumption could take you anywhere you want to go. What is this magical car? The Trabant.

“We do not believe in the “buy it, throw it away, buy a new one” philosophy of today’s consumer society. We use our 30-year-old Trabant which needs to be repaired constantly and requires a lot of work. And yet, we managed to visit, among others, the Aurora Borealis (the Northern Lights) or the North Pole, and we attended the Budapest-Bamako rally three times.” 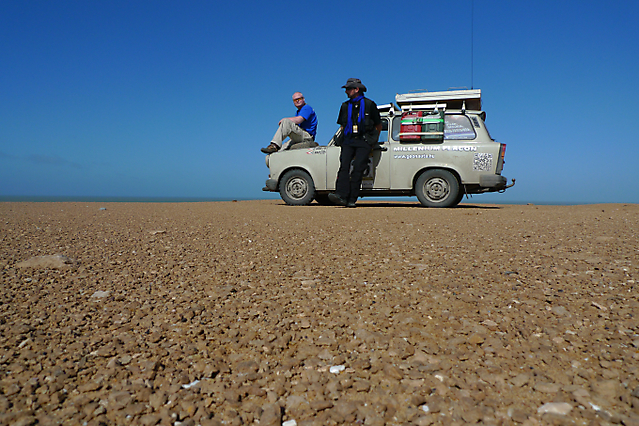 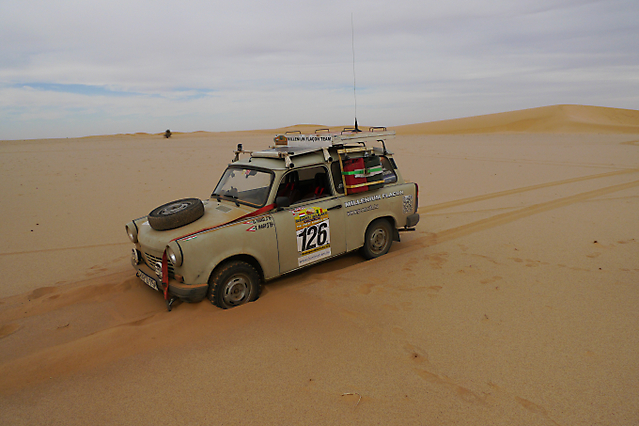 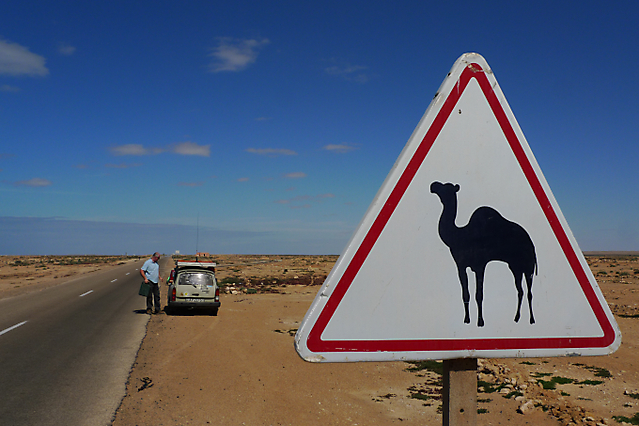 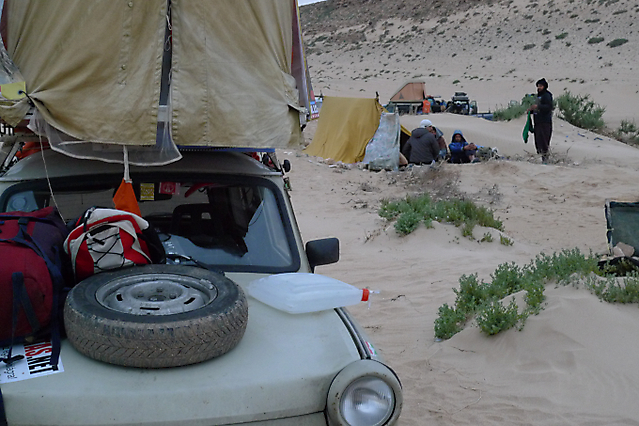 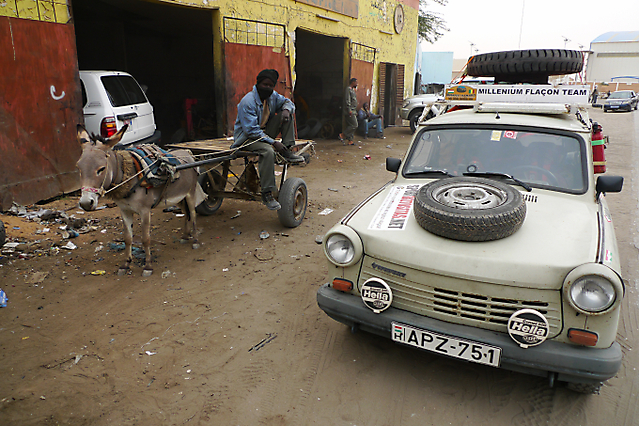 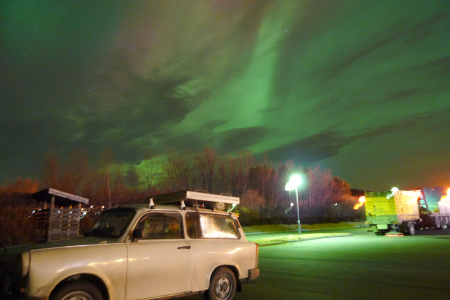 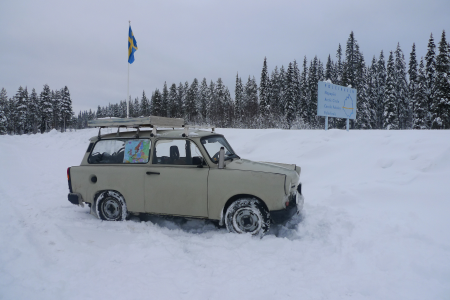 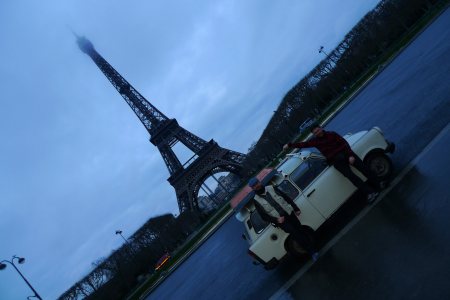 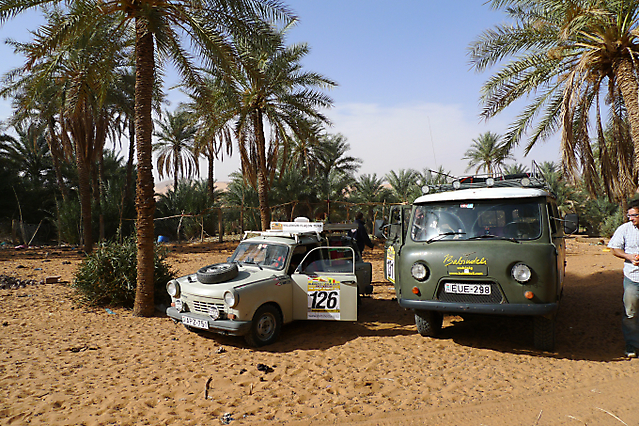 January this year, Zsolt and his friends decided to conquer West-Africa to explore the ways of nomad living in the Sahara Desert. In this expedition, Zsolt was accompanied by Nikolett Mitala, who later in February, gave a presentation about the Trabant expedition and the nomad ways of living in the West Sahara at Travel Expo Budapest.

As to why they decided to go West-Africa, Zsolt said:

„One of the most important parts of our expeditions is to provide humanitarian aid. All the equipment we buy for an expedition together (e.g. tents, polyfoams, etc.) usually gets donated after each tour.”

Even though there is very little space for stuff inside the Trabant, they collected a lot of things this time around as well to give away.

Zsolt and his group joined a humanitarian caravan from Budapest to Bamako. They were volunteer helpers who used their local connections and their knowledge of the place and the language to make sure that their aid gets exactly where it needs to. This precious cargo is called „Afrika másként” [Africa in another way].

During their tours around West Africa, Zsolt visited The Atlas Mountains (his friend András Nagy even climbed the Toub-cal, 4167m) and the sand dunes of South Morocco. Near Ouarzazate, Zsolt together with his colleague Zsolt Varga visited one of the world’s biggest solar power stations.

I asked Zsolt about the hardships of these tours and how can he on top of making the journey itself, make videos and vlog regularly for their YouTube channel.

“It is not easy to edit videos after driving hundreds of kilometres on the road in this extreme weather, but we really hope that it is worth it. In spite of the difficulties, we get to see amazing places, and we always try to save time for the arts and culture.”

Low cost above all else, a unique way of exploring the world

Zsolt said that they have a unique style of travelling. They always keep their budget as low as possible.

“My principles about low-cost travel sometimes push my partners out of their comfort zones, but if we stayed in hotels, we would never know what it is like to sleep on the sand in the middle of the desert. If we went to fancy restaurants, the glass walls would separate us from the locals. We rather find local places to try the locals’ food, eat with our bare hands, taste things that are so different from anything we have in our European culture. We talk with the locals; we learn their language, we listen to their music, we get to know their culture.”

I also asked him what car he drives when he is not on tour, to which he said:

“I drive a Trabant, I am not a fraud. I am what I show to the world. This is not a show, this is reality.”