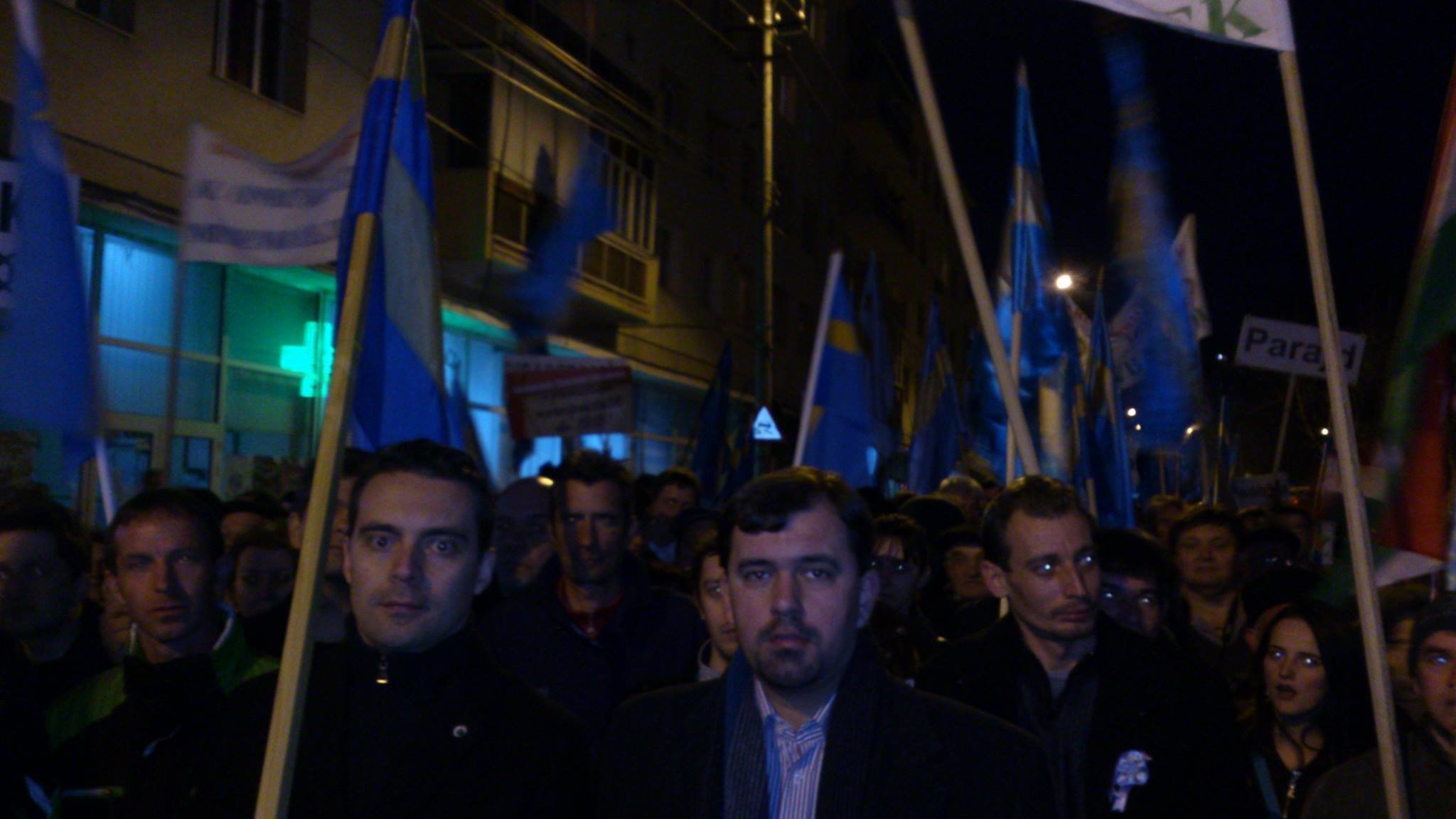 Ponta said after a cabinet meeting that the ministry had prepared the necessary documents on Tuesday.

Basescu requested the Romanian government and parliament on Tuesday to ban Jobbik officials and party members from entering Romania after a protest for Szekler autonomy in Targu Mures on the day before.

Romanian media reports highlighted the rowdy behavior of “Hungarian extremist groups” at the Day of Szekler Freedom events. According to the reports, Vona and several representatives of the far-right Sixty-Four Counties Youth Movement and “the Hungarian Guard which is banned in Hungary” were present and the latter was responsible for clashes with the gendarmerie.

In reply to Basescu, Ponta on Wednesday said that Romania cannot prevent members of a particular party who are EU citizens from entering Romania, but it can ban a particular person.

Jobbik said Basescu’s campaign to drive out Vona was an effort to deter attention away from the demonstration’s goal and from the community’s struggle for autonomy. Istvan Szavay, a Jobbik spokesman, told MTI that it was “outrageous” that the only message the Romanian political leadership had expressed about the Day of Szekler Freedom was the ban on Vona.

Vona and Szavay both participated at the demonstration on Monday.

You raised the issue of banning me from the territory of Romania again. You argued that the events taking place in Marosvásárhely during the Szekler Liberty Day on March 10 would justify your suggestion. You say that my extremist conduct would justify your measures. I stand utterly confounded by your statement. What have I done that would have violated any law? What I did was that I quietly and solemnly demonstrated in Marosvásárhely. If you ban me for this, what will you do to the thousands of people participating in the event? Will you ban the participating Belgian, Catalan and Basque leaders from the country as well? Because what they did was more than just walking silently as I did, they delivered magnificent and arousing speeches as well.

We have two potential explanations here. You were either misinformed, or you play a lowly and anti-Hungarian political game. Allow me to help you to clearly see what exactly happened in Marosvásárhely.

Thousands of people, including myself, attended the demonstration. The event was solemn and peaceful. At the end, there was a little shuffling between a handful of demonstrators and the police, the news of which was then widely reported and covered in Romanian media. The reports claimed that Jobbik and the Hungarian Guard were responsible for the incident. This is but a bald-faced lie. All members of Jobbik and the Hungarian Guard, including myself, walked in the street peacefully and without political party banners, as requested by the organizers. The above was confirmed by Corneliu Grosu, the county prefect himself(!). He stated that we had nothing to do with the incident. That’s all that happened. Is this why you want to ban me from the country? Mr. President, Mr. Prime Minister, don’t be absurd! I understand that votes are important, I am a party leader myself, but one should not sink below a certain level.

If you have a problem with me and my party consistently representing and standing for the cause of Szekler Hungarian autonomy, then say so openly. Do not try to hide your real intentions in such transparent disguise! I am a straightforward man. I do my best to seek and serve the truth, so I have nothing to be ashamed of. I can stand for all my words and actions, even my faults. If you have a problem with Jobbik’s political agenda or with me, be a man about it and tell me straight: your problem with me is that I support Szekler autonomy. I will see your point, but this childish attempt to ban me from the country is lowly and pathetic.

If you knew my agenda just a little, you would also know that it promotes the cooperation and historic alliance of Central Eastern European nations. I promote it so that we could jointly end the Euro-Atlantic colonization of our region. We share the same fate: either we will be slaves together or free together. However, we need to respect each other for that to happen. I respect the Romanian nation. You can see Mircea Eliade’s adn Emil Cioran’s books on my shelf. These Romanian people have greatly influenced my thinking, I was devouring their writings. If you respect the Hungarian nation, you needn’t fear Szekler autonomy at all.

Autonomy will empower the entire Central Eastern European region as well as the Szeklers. It will empower you, too. Believe me, I had the same thought on my mind when I was walking in Marosvásárhely with the Szekler flag on my shoulder. You love your own people. So do I. As long as my heart beats, I will be a Hungarian and I will struggle for autonomy. But you must understand that this is not against the Romanian nation, but for the Hungarians. And it is also for the mutual respect of our nations and the realization of our shared fate.

I wish you to have the necessary grandeur to rise above the swamp of political partisanship. So that you don’t sacrifice our shared future for a bowl of lentil stew.