Gabor Vona, who heads radical nationalist Jobbik, went to the polls in Budapest’s 11th district on Sunday. He encouraged all voters to go to the polls, regardless of their party preference. He said the election would determine whether governing Fidesz would have a strong challenger in 2018. The left has failed, both morally and politically, and the realistic alternative to Fidesz is Jobbik, he added.

Jozsef Tobias, chairman of the Socialists, cast his vote in Nyiregyhaza, in the east of the country, in the morning. “We expect victory in a number of county seats and several of the capital’s districts,” he said, also encouraging voters to make the time to get to the polls.

E-PM co-head Viktor Szigetvari voted in Budapest’s 12th district in the morning. He said the party had been established a year and a half ago to get the most representation possible in local councils, winning mayoral races as well. 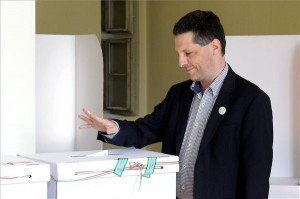 LMP co-chair Andras Schiffer said after casting his vote in Budapest’s 5th district that his party was the guarantee that public assets could not be divvied up behind closed doors. Starting on Monday, the prime minister is likely to introduce austerity measures and only LMP can protect the people from it, not the “pseudo-left” parties that are “stabbing each other in the back”.