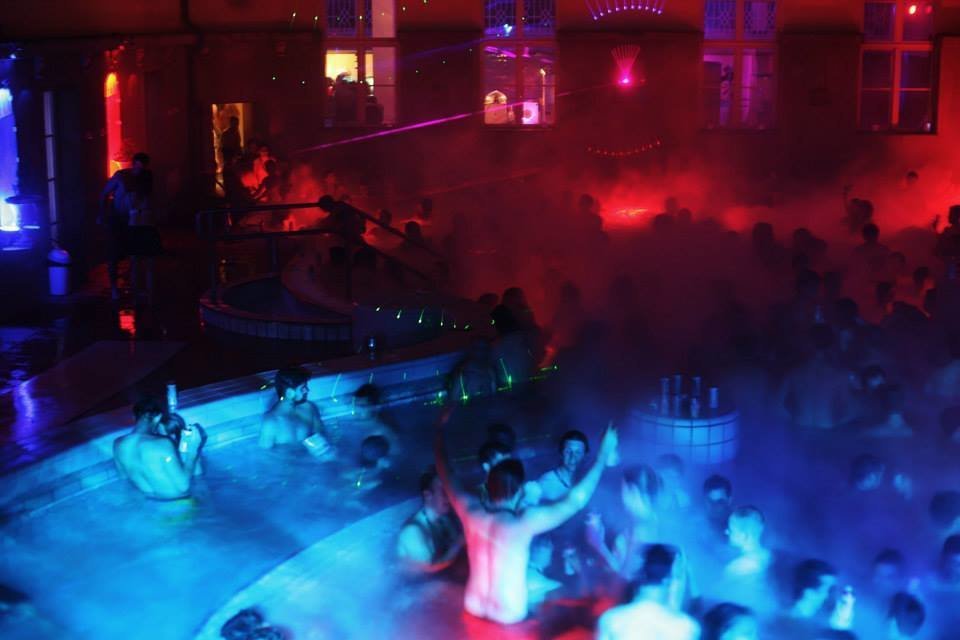 Have you ever partied in a historical building…in a swimsuit? Well, in Lukács Bath in Budapest you can try it every Saturday night until June. The Magic Bath Party series is a kind of spa party in the Lukács Thermal Bath which turns into a party venue with lots of laser rays, Djs and people having fun each Saturday night.

Partying, clubbing and dancing while you are having bath in the natural warm spring waters? This is what Magic Bath Party means. Budapest’s nightlife can boast of special Bath Party series each Saturday every year. In fall, winter and spring time Magic Bath parties are in Lukacs Bath while they are held in the summer season in another but opened thermal bath, namely in the Széchenyi Thermal Bath. Lukács Bath is one of the most popular thermal baths complexes on the Buda side which has recently been refurbished. Thus it’s a perfect inside area for such parties. The hot spring waters of the bath complex are supplied by thousand years old geothermal springs. In medieval times the Knights of St. John used it to cure themselves. Later, in the Turkish invasion the Ottoman Turkish soldiers conquered Buda Castle and built their wonderful baths along the Danube for ritual bathing, medicinal treatments and relaxation.

The winter edition of the Magic Bath party series in Lukacs Bath were on every Saturday from mid-February to 12 April, 2014. During the parties guests do not have to worry about catching a cold because if they feel cold outside of the pool they can just splash into the hot water to continue dancing. Music is also great, the DJ-sets play various electronic beats like trip-hop, drum and base, trance and other disco music for the party people.

Tickets for the Magic Bath can be purchased online or at the bath as well but you’d better buy them in advance due to the fact that tickets quickly sell out. Magic Bath tickets cost HUF 7.000 or €22. Interestingly, since all you wear are a swimsuit, a flip flop and a towel, buying cocktails or snacks is possible only with a special card. No cash is accepted inside the bath. For paying at the bar, which is full of liquid and edible delicacies, you need to have a special party plastic card which is charged when you check in the party. You can get the money left on your card back when the party ends no matter what kind of money you had before.

According to the event organizers, the forthcoming party dates of April and May will take place in the Széchenyi Bath in the biggest outside thermal spa in Budapest. This party series is very popular among tourists but locals also like trying different ways of clubbing and having fun. Meeting new people and enjoying the healing power of the thermals spas is an unusual way of spending a Saturday evening. So party is on, lets splash into a magical and unforgettable event right in the heart of Budapest!