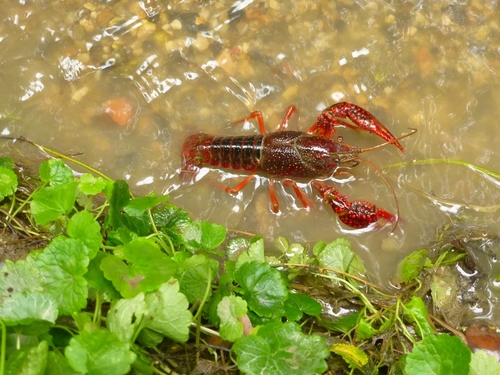 In the last six years, several alien ten-footed crayfish species emerged and spread rapidly in Hungary. These non-indigenous species seriously threaten not only the Hungarian species of crayfish but the whole ecological community and fisheries.

András Weiperth, PhD is a researcher at Szent István University (SZIU), Faculty of Agricultural and Environmental Sciences. He recently published a study about certain types of shellfish that emerged in Hungary. The survey can be read in Halászat (Fishing), a Hungarian scientific journal of agriculture and fisheries. The researcher shared the most important findings of this study on the university’s website, sie.hu.

There are three types of ten-footed crayfish native to Hungary: the noble crayfish, the Danube crayfish (kecskerák in Hungarian) and the stone crayfish. All three species are subject to nature conservation.

The noble crayfish is the most common species of crayfish in Europe. Like other real crayfish, it is restricted to freshwater, living only in unpolluted streams, rivers, and lakes. It is found from France throughout Central Europe, to the north as far as Scandinavia and Finland. Males grow up to 16 cm long, and females up to 12 cm. The Danube crayfish is a species of brackish water crayfish imported and introduced to Central Europe in the 19th century from the Caspian Sea region. It can grow up to 30 centimetres. The stone crayfish is a European species of freshwater crayfish. It is mostly found in tributaries of the Danube, having originated in the northern part of the Balkan Peninsula.

Besides the three indigenous species of crayfish, eight invasive alien species of ten-footed crayfish have appeared in Hungary since 2014; and András Weiperth thinks there are new species to come soon. Unfortunately, the appearance of non-indigenous species is not good news.

There will be severe ecological and environmental consequences. Some of the invasive species include Orconectes limosus Rafinesque, Procambarus fallax (red swamp crayfish), and Procambarus clarkia.

Ten-legged crustaceans are among the most endangered groups of animals worldwide, for which the most significant threat (besides the pollution of habitats) is posed by the emergence and rapid spread of alien species.

In the last almost half a century, the distribution of many American, Asian and Australian species has increased (mostly human influence) and successfully settled in Europe.

According to the Convention on Biological Diversity:

“Invasive alien species are plants, animals, pathogens and other organisms that are non-native to an ecosystem, and which may cause economic or environmental harm or adversely affect human health. They impact adversely upon biodiversity, including decline or elimination of native species – through competition, predation, or transmission of pathogens – and the disruption of local ecosystems and ecosystem functions.”

The invasive alien species are more competitive in many respects than our indigenous crayfish, and therefore they pose a serious ecological threat. Several studies show that the increase in invasive alien species could lead not only to the decrease of indigenous crayfish population, but they can also cause a significant reorganisation and degradation of living communities.

There has already been a drastic drop in the Danube crayfish population ever since the red swamp crayfish appeared and spread along the Danube.

Read alsoShocking! Honey might run out in Hungary in early 2021