Have you ever been to  Angelina Jolie’s favourite Hungarian castle? Have you seen the frescoed hall at Pécel, where the famous Hungarian writer, Mór Jókai spent his honeymoon? Have you ever been a guest of an earl? In the following, there are three castles, which are not further than 50 minutes from Budapest. Though not being perfectly renovated, their splendor is still preserved.

With its spectacular clocktower and graceful chimneys, Schossberger Castle could stand by the Loire Valley. It was built in 1883, according to the plans of Gyula Bukovics.
Although the castle included many technical achievements (electricity, central heating, food elevator), it was used as a hospital by the Germans (and later by the Soviets) during the World War II. Until 1973, it was used as a school; and its renovation finally began in 2005.

Many ambitious plans have been raised (including a five-star wellness hotel), but its future is still insecure. For now, the interior of the castle is spectacular rather than the outside.
Despite its ruined condition, the castle can be visited daily. It is also an important filming location, it is a typical location in Angelina Jolie’s directorial debut.
Opening times:
April 1 – October 31., Monday-Sunday: 9:00 – 19:00
November 1 – March 31., Monday-Sunday: 9:00 -16:00
Tickets:
Full price: 1500 forint
Students and pensioners: 750 forint
Up to 7 years, admission is free.

By the frontiers of the capital city, Ráday Castle stands at Pécel as a miniature copy of the Grassalkovich Castle. The similairty is not accidental: in 1755, Gedeon Ráday commissioned András Mayerhoffer (the builder of Grassalkovich Castle) to convert the mansion into a baroque castle.
According to travelo.hu, there are two special things which are definitely worth visiting the castle: the frescoes decorating the halls, and the baroque kitchen in the basement. The frescoes are black and white, and depict scenes from the Greek and Roman mythologies. 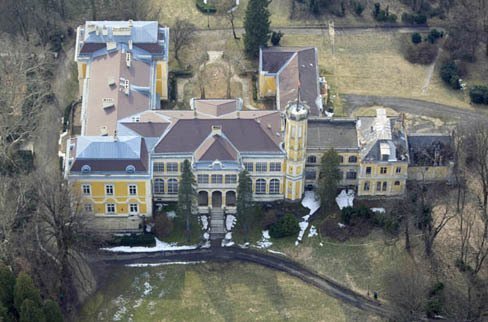 This castle was built in the early 1800s, and then extended by Miklós Ybl in 1840. Since 1995, 83-year-old Count László Károlyi has been living in the castle with his wife and their dog; though, the castle is not theirs, they only rent it from the state.
However, they deeply care about the fate of the castle. For example, this year, an exhibition about the past of the family and the  castle will be opened. Until that, the castle can be visited by logging in, and the wines of Count Károlyi can be tasted at the Fót Castle Restaurant.
It is also worth taking a walk before in one of the first English parks of Hungary, and sneaking into the magnificent hall of the castle, where weddings are held.