Official song for 1956 Memorial Year to be presented today! – VIDEO

Budapest, August 15 (MTI) – The official song for Hungary’s 1956 Memorial Year will be first broadcast on public Petőfi Rádio on Tuesday. 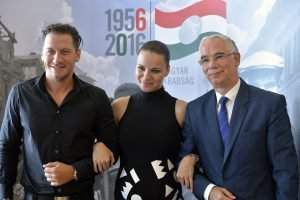 The song, created by renowned US songwriter of Hungarian descent Desmond Child and entitled “Land of the Free” (in Hungarian: “Egy szabad országért”) will be presented by an ensemble of popular Hungarian musicians (Kati Wolf, Szilvia Péter Szabó, Gigi Radics, Feró Nagy, Sándor Sasvári, Csaba Vastag, Tamás Vastag, Ferenc “Caramel” Molnár, Mónika Lakatos and the Romengo, István Pál and his band, the Hooligans Band and a choir of 56. The song will have a Hungarian and also an English version.

Human resources minister Zoltán Balog, head of the committee in charge of arrangements for the memorial year, told a press conference on Monday that the government seeks to involve a broad range of people in the preparations, with the aim to present the legacy of the 1956 anti-Soviet uprising in a rich context.

Meanwhile, the promotional film for the memorial year has been published on Facebook and on the website of the programme.

Five people have died and more than 100 others have been infected with the novel…
We and our partners use technologies, such as cookies, and collect browsing data to give you the best online experience and to personalise the content and advertising shown to you. I accept
Privacy & Cookies Policy