The story goes like this: after having spent dinner at Costes on Ráday street, Guy Savoy, one of the most famous figures of international cuisine, talked to Eszter Palágyi, the chef of Costes. Palágyi, of course, asked for practical advises on how to get their second Michelin star, to what Savoy replied “are you kidding me, mademoiselle? What I ate today deserves three Michelin stars!” 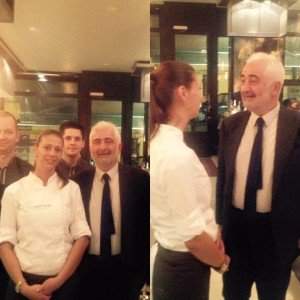 capital. The infamous chef Gordon Ramsay was among his disciplines, and Ramsay thinks of Savoy as his culinary mentor.

Savoy is famous for a reason: his self-titled Parisian restaurant got its third Michelin star in 2002 and was listed among the world’s 50 best restaurants by the British Restaurant. Savoy’s Las Vegas restaurant has two Michelin stars, an AAA Five Diamond Award, it won the Forbes Five Star Award, and also has a Wine Spectator Grand Award. In 2000 he also received the National Order of the Legion of Honour from the French Republic.