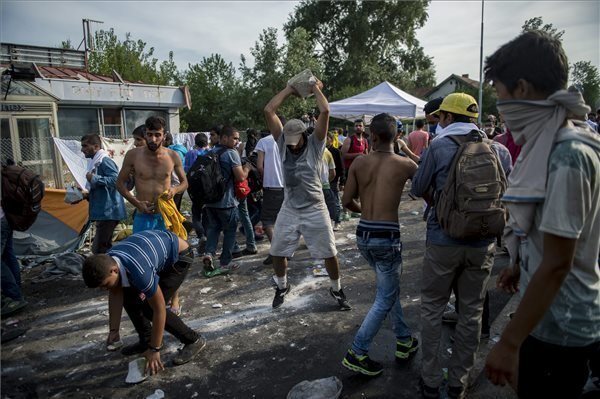 Budapest, September 16 (MTI) – The Hungarian police stopped a crowd of migrants which broke through the gate at a crossing point of the Röszke-Horgos station on the border between Hungary and Serbia, on Wednesday.

Earlier, the police used tear gas and water-cannons against the aggressive crowd, numbering several hundred people, after they threw stones, bottles, and burning torches at the officers. MTI’s on-site correspondent said that the migrants had “besieged” one of the crossing points at the facility.

The migrants set fire to rubber tyres, after which the area was covered in thick, black smoke. They also climbed on the roofs of small buildings and continued to throw objects at the police.

The police put into action a significant number of officers, including members of the counter-terrorism force. Police and army helicopters were patrolling the area.

MTI’s correspondent saw thousands of migrants, including women and children, setting up a camp along the road to the crossing point.

Aleksandar Vulin insisted that the water-cannon impacted Serbian territory. He also voiced sympathy with the migrants’ disappointment, which he associated with Hungary’s closing of the border.

Meanwhile, groups of migrants including women and children left Horgos and set off in the direction of Croatia.