Public bicycle pump system has been launched in Budapest

According to szeretlekmagyarorszag.hu, nine public bicycle pumps have been installed in different spots of Budapest to help cyclists with deflated tyres.

The public bicycle pump system might be the most useful initiation that Hungarian cyclists could’ve received from Budapest this year. The BVA Budapest City Image Non-Profit Kft installed 9 bicycle pumps in different locations of Budapest in partnership with BKK (Centre for Budapest Transport) and the Hungarian Cyclist Club. 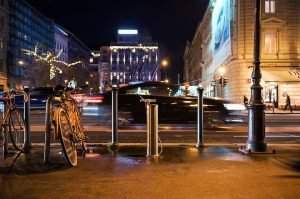 These urban inflators can be used by anyone without any restrictions, but, naturally, it’s worth taking good care of them so that they can serve cyclists for lots of years. The organisations also promised to launch even more pumps in 2017. If you want to see the exact locations of the public pumps, click here. They are signalled with small, green pump symbols.