The first metro line in Budapest (officially known as Millennium Underground Railway) is the oldest in Continental Europe and second oldest in the world ­ after London underground.

The first train ran here in 1896 when Hungary celebrated its Millenium (the thousandth anniversary of the foundation of the Hungarian state): actually it was built exactly for this reason and in order to connect city with the park and castle which were not parts of the city at that time.

This line is not deep and mostly goes under Andrássy Avenue (which is the main avenue of the city, with lots of sightseeing and which is often compared to The Avenue des Champs­Élysées).

So, lets have a small journey and find out some nice places, at the same time learning about some personalities and events which played some role in Hungary and its history.

We are going to start from Vörösmarty tér. This station is on the square where you can always find some fair, where Vaci street begins (the main shopping street for tourists and not only). In the center of the square there is monument for Mihály Vörösmarty. He was Hungarian poet, writer and translator of 19th century. All his works are full of heroism and patriotic feelings. One of Mihály Vörösmarty`s poem is Appeal (Szózat) ­ it is the most famous work of this person, which nowadays can be heard during national holidays. Here are some lines:

Oh, Magyar, keep immovably
your native country’s trust,
for it has borne you, and at death
will consecrate your dust!
No other spot in all the world
can touch your heart as home
—let fortune bless or fortune curse,

from hence you shall not roam! As he lived during the Revolution of 1848 he supported it and had been a Member of Parliament during this time. As a professional lawyer he also had been a judge in Supreme Court of Hungary.

The next stop is Deák Ferenc tér. Deák Ferenc was Hungarian politician of 19th century. He can be called as the father of Austro­Hungarian Compromise of 1867. Hungary received internal independence, but there were left some issues which can be better realized by both countries together on an equal footing. For his wisdom and diplomatic qualities he was called “Hungarian Wiseman”.

And we are going further and our next stop is right in the beginning of Andrássy Avenue and Bajcsy ­Zsilinszky street ­ Bajcsy­ Zsilinszky út. Here you can find St. Stephen’s Basilica. The street is named after Hungarian politician, journalist and one of the members of anti­fascist movement of the beginning of 20th century ­Endre Bajcsy ­Zsilinszky. He was one of the organizers of National Radical Party speaking against war with USSR, also was famous as organizer of the anti­fascist Hungarian Front (1944) but very soon was captured and executed by the Nyilaskereszt part (Arrow Cross Party) ­ the fascist party which was active in Hungary during 1938­-1945.

Opera ­ as we can guess from the station`s name here can be found Hungarian State Opera House. The Opera was opened in 1884 and the building was designed by famous architect Miklós Ybl. It was built in neo­Renaissance style, with elements of Baroque. This Opera House is considered as one of the best in beauty and the quality of acoustics in the world. At the same time Opera House is the main stage for Hungarian Ballet.

Octogon ­ the square got such name because of its eight angles. It is important junction point of public transportation of Pest. Very close you can find Liszt Ferenc Square which is very cozy with lots of trees, flowerbeds and cafes.

Vörösmarty utca ­ this street crosses Andrássy Avenue and has the name of Mihály Vörösmarty about whom I wrote in the beginning. Here you can find House of Terror ­ museum which is dedicated to totalitarian times of Hungary, also in that building there was prison where opponents of the regime were tortured. 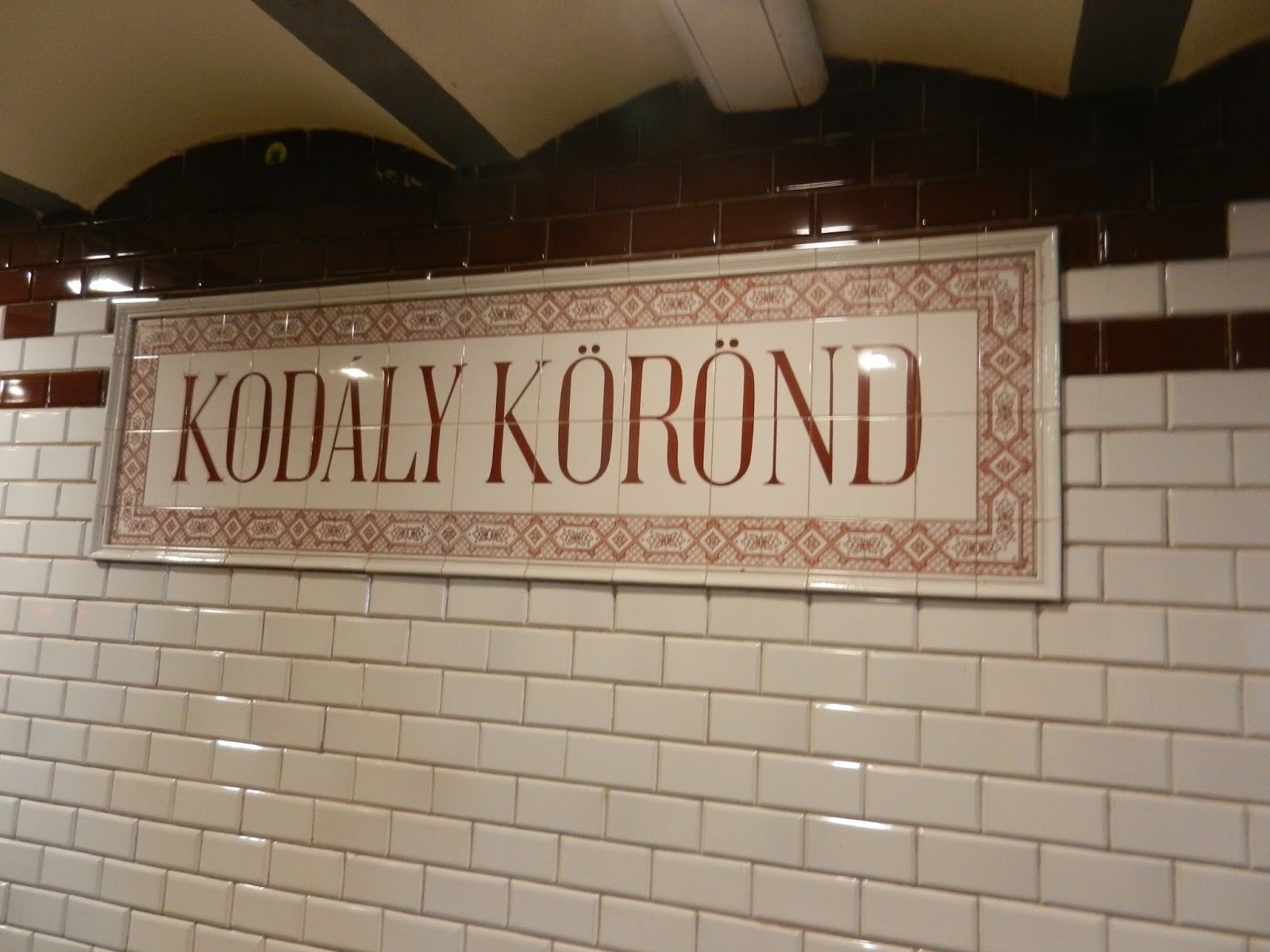 Kodály körönd ­ the square bears the name of Zoltán Kodály who lived in one of the buildings on that square. He was Hungarian composer and one of the greatest theorist of music education of 20th century. He created Kodaly method which is very important in world of music till now.

Bajza utca ­ the street has the name of Bajza József, who was a poet, writer and theatre critic of 19th century. His most significant works had the spirit of patriotism. He is one of the best Hungarian writer and he brought invaluable contribution to the development of the Hungarian theatre while being a director of National theatre in Pest. During the 1848­1849 Revolution was editor of semi­official Kossuth`s newspaper.

Hősök tere ­ (Heroes’ Square) Andrássy Avenue ends here. This square is one of the most significant and famous in the city. It was built in 1896 for the celebrations of Hungary`s Millenium. On the square you can find several monuments: in the center there is column with the archangel Gabriel who holds the crown of St. Stephen (Istvan) on the top. According to the legend it was archangel Gabriel who had come to the first king of Hungary and had persuaded to convert magyars to Christianity. At the base of column there are monuments of seven chieftains who brought this people to the territory of current Hungary. Also on the Heroes` Square you can find two semi­circular colonnades ­ the monument to the people who played an important role in Hungary in different periods of its history.Right behind the square there is City Part (Városliget) which is the first public park in the world. The territory of the park is quite big and nice, you can find there a lot of interesting places and activities, such as: thermals, zoo, lake where you can rent a boat in summer or skates in winter, castle.

Széchenyi fürdő ­ the station which is located in the City Park and here you can find Széchenyi thermal bath. This thermals are the biggest in Europe and there are several inside and outside pools with cold and hot water. The water contains lots of useful for health elements. Count István Széchenyi was hungarian politician, reformator and writer of the 19th century, very often he is called one of the best statesmen of Hungarian history. He had come from noble and ancient family. Count István published several works against conservative views of gentlefolks and he suggested to waive the privileges. He played a significant role in subsequent unification of Buda and Pest into one city through the construction of the bridge between those two towns (this bridge we can see till now in the city center and it holds the name of the Count ­ Széchenyi bridge).

Until 1973 this station was the last one ­ that year one new stop was built ­ Mexikói út. It is located at the end of City Park and appears to be a junction station for several public transportations` routs.

Hope you enjoyed the journey and Hungary turned to be a bit nearer to you!