On May 25 was the funeral of Miksa Ágoston Diendorfer (Dombay) with military honors on the Heroes Day. Diendorfer was a battalion commander in the Imperial and Royal (K.u.K.) 46th Infantry Regiment of Szeged. 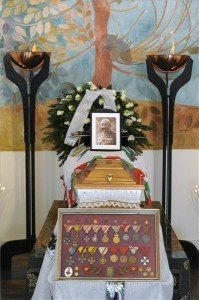 József Holló, retired Lt. Gen. and the Military History Museum’s former director spoke at the funeral in the downtown cemetery. He said that the general led his army heroic in World War I against the Serbians, the Russians and against the Italians. MiksaÁgostonDiendorfer earned 23 medals. After the war he has been moved to Jászapáti, and he died in 1952. After his death he has been buried in an unmarked grave.

On Sunday, he has been put to eternal rest along with his comrades, at the Cross of Heroes. On the funeral the firing squad and the military band gave him the military honor. LászlóKiss-Rigó led the funeral asdiocesan. To the worthy burial, the Public Relations Department of National Defense and War Department Tribute, the county, the city of Szeged Testament Funeral Association Ltd. and the Meritum Association. The Fraternal Club of Szeged remembered at the Heroes Gate of the fallen heroes of World War I and World War II.

based on article of delmagyar.hu
translated by AKOS

In an attempt to boost domestic sales by engaging with the buyer through their…
We and our partners use technologies, such as cookies, and collect browsing data to give you the best online experience and to personalise the content and advertising shown to you. I accept
Privacy & Cookies Policy