Last year, in unprecedented fashion, three orangutans were born in the Zoo. From our lot, Bulu Mata has gone to England; however, three orangutan youngsters are still growing up with us: Moira, AnnaHanna and Lone. 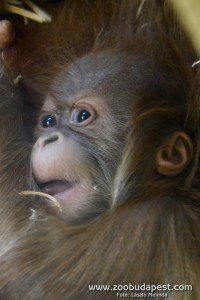 Keeping orangutans at our zoo have a history going back several decades. However, it was only from the 1990s on that we can talk about a steady increase. Since then, altogether nine healthy orangutans have seen the light of day in Budapest. Once – in 2010 –there was an example of two babies being born here but for three babies to be born in a single year had never occurred until 2014.

Bulu Mata, who was born in September, was the first orangutan baby of 2014, but her mother sadly died soon after giving birth and so we searched on behalf of the little one for the ideal safe place. The baby went to the British Monkey World as the results of the international cooperation where it lives a happy life. In this video you can see Alison Cronin speaking at Budapest Zoo about the little newborn animal.

On November 24th 2014 AnnaHanna came into the world, while on December 18th we were delighted with our third ape baby, who would be another little girl. She was recently given the name Lone by her keeper, as a tribute to the Danish conservationist Lone Drøscher Nielsen, who has performed outstanding work in saving the highly endangered orangutans.

This is how altogether three orangutan youngsters are growing up in Budapest Zoo, because it was not possible to forget the existence of April 2010’s Moira; she has already outgrown the baby stage but, like a real naughty child, acts up tirelessly.