What comes to your mind when you hear the word: Christmas? Love, family, quality time, homeliness, gifts, snow and of course: food and drinks. Among other traditions, festive dining plays a very important role in the celebration. Different traditions can be connected to eating and they vary from region to region. Let’s see the most popular ones in Hungary.

Most of the meals were thought to have magic powers and that they were able to foretell the future. Eating pasta with poppy seeds or Hungarian poppy seed bread & butter pudding with an orange vanilla custard (mákos guba) promised a good marriage, leguminous plants (beans, lentils) promised wealth and good harvest, while eating an apple, cut into the same amount slices as family members, symbolised the togetherness of a family. Also, the roundness of an apple symbolised the roundness of the upcoming year. Walnut forecasted whose going to be ill next year. Garlic ensured health for the next year and honey was believed to make life sweeter.

An inevitable element of the Christmas table is fish. This is an urban tradition that comes from Vienna but in Hungarian folklore it has a symbolic meaning. Fish-scale means wealth and a family will move forward in the next year as quickly as fish swim in the water. It’s quite probable that you find Hungarian hot fish soup with paprika and onion on the Christmas menu. 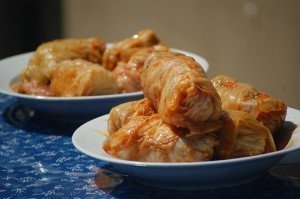 In former times, the typical meat on the festive table was pork. It symbolised advancement, development in the next year just as a swine roots forward.  On the other hand, they didn’t eat poultry because they scratch backwards. But as we know, traditions wander from country to country. This is how turkey became an important part of the Christmas table. Potato salad with vinegar and red onions is a popular side dish. Something else that many people await is stuffed cabbage which can be prepared in several different ways. 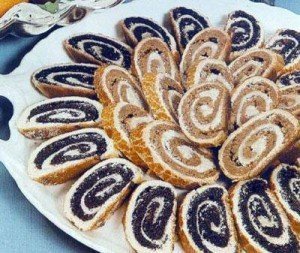 The dining table was the most treasured furniture in a rural house. They only laid the table on celebrations. They used red cloth on the table because red is the colour of happiness. They put straw under the table that symbolised the manger in Bethlehem. The straw was then put under the stock so that all animals would be healthy in the next year. Last but not least, according to another belief, the housewife couldn’t stand up from the table while eating so that the hens would lay lot of eggs.