Two Hungarian settlements among the most flowery towns of Europe

The Entente Florale Europe award ceremony was held last week in the Brno. Hungary was represented by Dunakiliti in the village category and by Mosonmagyaróvár in the city category. Travelo.hu writes that both settlements finished in the second place and took home illustrious awards.

Entente Florale Europe is a European competition for towns and villages. Each participating country puts forward a representative town and village. The town and village are visited by the jury and an assessment is made. The competition was founded in 1975, initially between Great Britain and France.

The competition is a real challenge for participants: besides floridity, environmental protection, ecology, environmentally conscious education, the conservation of natural and artificial heritage, and modern garbage and energy economy are also important requirements. The jury also pays attention to the neatness and graffiti-clearness of the settlements. The field is quite strong, the participants include countries with high standard environmental culture like the Netherlands, Germany, Austria and Belgium.

Entente Florale Europe’s unique programme mobilises almost 50 million people every year and builds connection between 25 thousand settlements in favour of creating and conserving a harmonic environment. Hungary has been participating in the competition since 1990. So far, we’ve won 9 gold, 25 silver and 10 bronze medals. 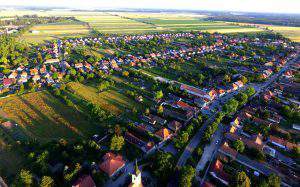 Our country’ has also been awarded with further prizes like The most beautiful main square special prize. Mosonmagyaróvár received a certificate of merit for its Futura Interactive Natural Science Centre, while Dunakiliti’s Kiserdei Kindergarten was also acknowledged as a green kindergarten.