The Hungarian Football Federation (MLSZ) announced on Tuesday that the official ambassador of UEFA Euro 2020 venue Budapest will be none other than 97-time Hungary international forward Zoltán Gera.

UEFA is organising what will likely be their biggest tournament ever, the 2020 Men’s European Championship. Of the 12 venue cities, eight will be capital cities, Budapest naturally being one of them. The brand-new Puskás Stadium, due to be completed and handed over later this year, will host three group matches and one 2nd-round knockout tie.

“Hungarian supporters are, in all senses, the winners in Budapest’s hosting (of Euro 2020 matches) because a good few of Europe’s best teams will play in Budapest.

The cream on top of the cake would of course be for the Hungarian national team to be amongst these teams. This is what we, the technical staff, and the players are workng on. We’re going to draw everything we can out of ourselves in order to be successful and put this cream on top of the cake”, Gera, who scored what many fans around the world deemed to be the goal of the Euro 2016 tournament in Hungary’s 3-3 group-stage draw with eventual winners Portugal and is now one of the national team’s backroom staff, told mlsz.hu. 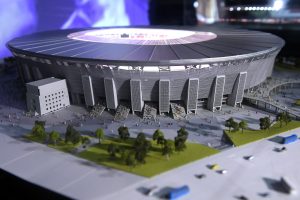 It’s interesting to note that 14 countries have thus far hosted the men’s European Championship but that almost as many – 12 – will be joint hosts in 2020. Furthermore, last year, the World Swimming Championships were hosted in Hungary’s capital and this year the Women’s Champions League final will find its home here, but the European men’s football championship is an even bigger event and will be one of the biggest that Budapest has ever hosted.

Indeed, Euro 2020, to be held 60 years after the inaugural tournament, will be a true football festival with each host city offering its own atmosphere and culture to the party.

“Most of my thoughts at Ferencváros and the national team are on my daily work. At the same time, from now on, it will always thrill me to think that I am one of the ambassadors of the 2020 European Championship. The task is a huge honour for me”,

Gera, former star player and now assistant coach of the Hungarian men’s national team and Ferencváros, admitted with a wide smile on his face.

As a result of the pandemic outbreak, people started to accumulate non-perishable…

The government is extending indefinitely restrictions on movement introduced two…

The government's education taskforce has proposed simplifying secondary school final…
We and our partners use technologies, such as cookies, and collect browsing data to give you the best online experience and to personalise the content and advertising shown to you. I accept
Privacy & Cookies Policy