(MTI) – Jobbik leader Gabor Vona on Sunday promised jobs at home to Hungarians living and working in London if his party enters power at the April parliamentary election. 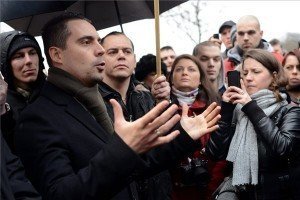 Vona held a rally in London’s Hyde Park after hundreds of British anti-fascist demonstrators had prevented Jobbik supporters from accessing a location where he originally planned to speak near Holborn tube station. The demonstrators who organised their protest on Facebook blocked the exit of the tube station and police officers, in an effort to prevent a breach of peace, closed the facility.

Vona told around 150 people in Hyde Park that Jobbik’s programme is based on guaranteeing Hungarians a livelihood, maintaining peace and order and calling everyone to account for past deeds. Jobbik has not and will not submit bills that differentiate between citizens based on their ethnicity, he added.

Vona also told his audience that Jobbik would call a referendum about Hungary’s European Union membership because he said the country is a “net loser of the European Union.”