Budapest, September 1 (MTI) – The government will set up an advisory board tasked with putting together a plan to improve Hungarian medical education, the government office chief said on Thursday. Illegal migration will continue to be a problem over the coming years, which is why the fence on Hungary’s southern border needs to be reinforced, he said.

The plan aimed at improving medical education will address both the actual learning material as well as the financial and infrastructure aspects of medical training, Lázár added.

He said the advisory board will comprise Hungarian medical professors. The aim is for the board to approve the educational development plans on the basis of a professional consensus, Lázár said.

Lázár said the strategic cabinet has discussed a proposal that parliament should approve a report on the state-owned land privatisation programme. The cabinet also recommends wrapping up the auctions of farmlands larger than 3 hectares, he said. He noted that the government plans to spend the 270 billion forints (EUR 871.6m) in revenues from farmland auctions on reducing the public debt.

On another subject, Lázár said that by 2018 Hungary will look for the graves of the 650,000 Hungarian soldiers who fell in WWI on the Galician, Serbian and Italian fronts. The government has also decided to renovate all of Hungary’s WWI graves and monuments by the autumn of 2018. The government has also confirmed its plan to build a central memorial in Budapest to the victims of the war, he said. There are also plans to build another memorial somewhere else in the country, Lázár added.

Regarding the upgrade of Budapest’s third metro line, Lázár reiterated the government would ensure that replacement buses needed during the upgrade would be sourced from Hungarian bus manufacturers. But the government will stay true to its word and cover any extra costs that would arise from buying Hungarian-made buses. “Although it may cost the capital more to buy Hungarian buses, in the end it will benefit the national economy,” Lázár said.

He said the start date of the metro upgrade was not up to the government, adding that there were no financial obstacles to starting the renovation. Lázár added, however, that he thought it unlikely that the upgrade would start this year. He said Prime Minister Viktor Orbán will meet Budapest Mayor István Tarlós on Friday to discuss the metro upgrade.

Asked about the possibility of introducing a chancellery system (state appointed economic managers) in the public health-care sector, Lázár said talks are under way on the matter, adding that the government’s aim was to establish a uniform health-care management system. He said the government has to learn from the mistakes made with state school manager Klik, namely that if a system becomes too centralised, it could hamper the quality of what it is trying to manage.

He said the European Commission had approved Hungary’s state monopoly on retail tobacco sales, adding that it remained to be seen if the government could also make the wholesale trade of spirits or medicines a state monopoly. 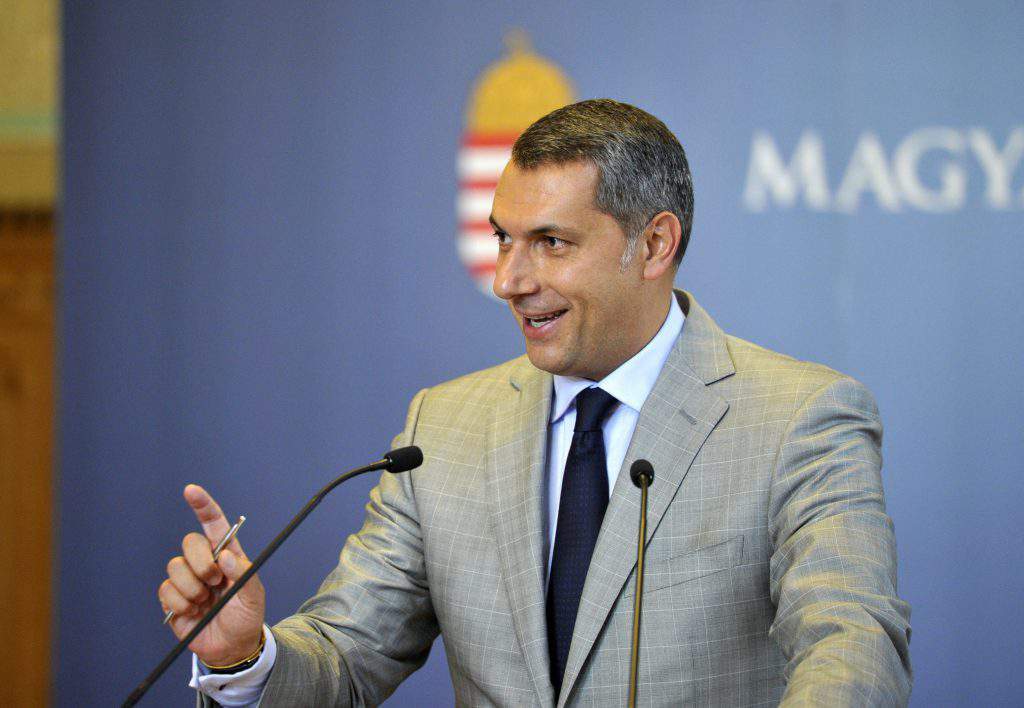 The aim of the second barrier Hungary plans to erect on its border with Serbia is to ensure that the country is fully secure, János Lázár told a regular government news conference. Hungary will also expand its police force and army, he added.

Regarding the migrant quota referendum scheduled for Oct. 2, Lázár said that if Hungarian voters “don’t help the government” by rejecting the European Union’s planned migrant quota scheme, Hungary will not be strong enough to “defend itself against” the EU’s plan. Hungary needs strength to change the European Commission’s decision on the migrant redistribution scheme, and that strength can only come from voters, he said.

He said those urging voters to boycott the referendum are “cowardly politicians” who are not brave enough to state their opinions on migrant quotas.

Prime Minister Viktor Orbán will “do his part” in the government referendum campaign, he said.

Answering a question concerning the pledge by Socialist leader Gyula Molnár to support the government’s fight against migrant quotas, Lázár said that whereas the opposition party’s support would be “very great”, its actual strength would rely on the will of the voter, and this is why he had asked the Socialists to reconsider their standpoint calling for a boycott of the referendum. Earlier on Thursday Molnar said the Socialist Party was against the EU’s migrant quota plan and that if the government were to submit an anti-quota bill to parliament, his party would be willing to support it.

Lázár added that a vote against the quota did not equal a vote for Fidesz.

Lázár said that at an EU summit on Sept. 16 convened to discuss the future of the bloc, Hungary wants to represent a standpoint formed by the Visegrad Group.

Among the Hungarian government’s proposals are maintaining strict budgetary discipline in European economic policy and putting security issues at the heart of the EU’s future. Further, the EU should preserve its successful policies such as its cohesion and agricultural programmes, he said. It should also create new policies in the realm of digitalisation, he added. Hungary urges that certain issues should remain within the purview of individual nations, the minister said.

On the subject of the prime minister’s schedule next week, Lázár noted that Orbán will meet his Serbian counterpart in Belgrade on Monday, take part in a V4 meeting in Poland on Tuesday and Wednesday and then give a speech at a Fidesz parliamentary group meeting held in Balatonfured on Wednesday evening. Among topics to be covered there will be the referendum, land sales, reform of public administration and development policy, he said.

Lázár said the strategic cabinet had reviewed the 21 infringement procedures launched against Hungary, in the majority of cases in economic areas. Hungary has come out on top in several of these procedures but there are difficult issues to contend with, too, he said, mentioning land. The European Commission wants foreigners and legal entities to be able to purchase farmland in Hungary without restrictions or limits to the size of the land, Lazar said, adding that on the matter of Hungary’s southern border fence, Brussels has not initiated an infringement procedure.

Commenting on German Chancellor Angela Merkel’s statement that it won’t do that certain countries decide not to have Muslims, Lázár said the chancellor’s statement concerned mandatory settlements. Hungary, however, does not need immigration, he said. “What won’t do in any way is Berlin telling Europe and Hungary whom we have to accept,” he added.

Meanwhile, he said the government supports the candidacy of Mátyás Eörsi, a former MP of the now-defunct liberal SZDSZ party, to head the Community of Democracies, an international human-rights group. He said that Eörsi was “the least bad” of the candidates.