Have you ever heard about slam poetry? Would you like to learn about the Hungarian and European scene? Then, let poetry, theatre & rap music unite as one.

As Encyclopædia Britannica describes, slam poetry is “a form of performance poetry that combines the elements of performance, writing, competition, and audience participation.” According to Funzine, it draws back to the 1980s when Chicago-based poet Marc Kelly Smith, aka ‘Slam Papi’ felt the need to bring poetry closer to people. He organized a weekly poetry event (predecessor of today’s poetry slams) where poets would perform their work live to be judged by five randomly selected members of the audience on a scale of 0 to 10. The poet who got the highest scores won the competition.

Slam poetry is a bit like rap music with its colloquial language use and ordinary theme choices, a bit like theatre with its pre-rehearsed texts and the human body as a tool of expression, and a bit like poetry with its rhymes, metaphors and similes.

As for 21th century poetry slams, they are pretty much the same as back in the eighties. Today there is only one strict rule: the poet (or group of poets) only has three minutes to recite, argue, entertain, amaze and make you think.

The poetry slam movement in Hungary began in 2006 with Budapest Slam, the battle of poets and rappers. A year later it was organized again with international guests coming to Hungary for Budapest Slam 2. In 2008 poetry slams were monthly held at Kőleves. The same year Slam Poetry Budapest (SPB) was established, assigning a theme for every occasion, launching a 10-word poetry slam competition and giving the opportunity for amateurs to take the stage as part of an open mic. 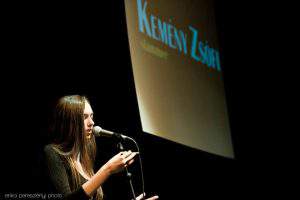 In 2012 SPB moved from Kőleves to the neighbouring Mika Tivadar Bar (named after its former landlord, Hungarian iron and copper factory owner), then to Kolor Bar in 2013.

Since 2014 Slam Poetry Budapest Klub has been held on the last Thursday of every month in popular urban hangout Anker’t at Paulay Ede utca 33.

For the first time this year Hungary will be hosting the biggest event of the genre on the continent, European Poetry Slam Championship between 26 November and 1 December. With contestants from more than 20 countries, Anker’t and Trafó House will give home to the 6-day festival, boasting interactive workshops and roundtable discussions.

Funded by the US Embassy Budapest, an open debate will also take place at the championship for the first time, including Marc Kelly Smith and another well-known poetry slam advocate, Bob Holman.

As part of the Grand Slam Debate, they will be discussing their sometimes conflicting views on poetry slam, as well as its origins, evolution, main issues and tendencies.

Supported by International Visegrád Fund, the Bridging Barriers program invites poetry slam community members from Slovakia, the Czech Republic, Poland, Serbia, Macedonia and the Ukraine to Budapest. An intensive 3-day workshop will be held with the participation of the abovementioned country representatives to perform a special multicultural show at the end.

In addition, the winner of this year’s Women of the World Poetry Slam, Mwende “FreeQuency” Katwiwa is also visiting the Hungarian capital.