What do Hungarians celebrate on March 15?

More than 160 years passed, but the Hungarian Revolution of 1848 associated with Petőfi’s name is still commemorated by the Hungarian people. Multiple elements of the 12 points composed by the Pilvax Circle are still a relevant topic in the present, utisugo.hu reports.

A long time under pressure eventually led to a revolution on March 15, 1848. The same monarch ruled over the Kingdom of Hungary and the Austrian Empire, and the National Assembly of Hungary could only hold sessions in Latin or German language. Hungary couldn’t gain autonomy and the lowered taxes alone were not enough for the positive perception of the social opinion climate.

Although the French Revolution of 1789 ended decades ago, it had an enormous influence on the intellectual class. Moreover, the French declared war against the Habsburg Monarchy, which reached the territory of Hungary in 1805. Napoleon then ordered Hungarian nobilities to separate from the Habsburg dynasty, however, he lost the war in 1815. The demand for home products then decreased rapidly and the inflation hit.

Lajos Kossuth informed his nation about the controversy behind the curtain in his periodical called ´Országgyűlési Tudósítások´, which launched in 1832. Consequently, reform movements began to play a bigger role in the country. Count Lajos Batthyány became the leader of the opposition, in which Ferenc Deák also took part. Meanwhile in February 1848, a revolution started in France, then another in Vienna, March 13.

The news spreaded quickly and made an impact on Pilvax Circle members like Sándor Petőfi, Mór Jókai and Pál Vasvári. Only a few people headed to the press of Lajos Landerer and Gusztáv Heckenast to print József Irinyi‘s 12 points and Petőfi‘s National Poem, without censure. Despite the small number of participants at the press, more, than 10 000 people joined the congress on March 15 in front of the Hungarian National Museum. The congress then entered the Castle, where the Governor’s Council approved their demands. Mihály Táncsics was set free, and the revolution succeeded without spilling blood. Unfortunately, the celebration and freedom couldn’t last long. 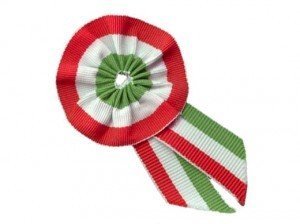 Don’t forget to pin your cockade!