Amazing unknown legends about our famous sights in Budapest – PART 1

There is always a lot to discover in Budapest since every corner provides something special, unique and breath-taking. Thanks to our fantastic capital that offers a scenic view over the Danube, more and more tourists visit Hungary, and most of them do not even know what incredible legends circulate about our famous or less known sights, reports Lobu.hu. Here is a collection of the most unusual stories and the truth lying behind them. So let us immerse ourselves in history.

The history of Budapest dates back to long centuries during which a handful of legends came to life. As it usually happens, it was particular people who started to spread them, but the rumour started to live its own life. From this article, you can figure out what gave basis to the legends about some of the sights in the capital and what the truth is behind them.

1. Thököly Street and the mysterious woman

If you walk with open eyes in Thököly Street and admire the buildings, you can see a figure of a woman looking into the distance from the balcony. According to locals, during World War I, a young couple lived in the building who were separated by the war. The man went to the front to fight while his wife waited for him in their home, every day. She was looking out of the balcony leaning on her elbows waiting for her husband to arrive.

However, at that time, the Spanish flu infected millions of people in Hungary and the young woman was no exception to the deadly epidemic. She became seriously ill; still, despite her illness, she was on the balcony every day hoping to see her beloved one. According to the legend, it is here that she died.

It is the irony of fate that the husband arrived from the front right on the next day, but he only found his dead wife on the balcony. He set up a statue to honour his lady for her loyalty and walled up the door of the balcony so that nobody could even step into that place.

2. The Chain Bridge and its lions

Many legends are circulating about the lions sitting on both sides of the Chain Bridge. The most well-known legend holds that the lions have no tongue due to which the sculptor, János Marschalkó, was humiliated and being much ashamed, he eventually committed suicide by jumping into the Duna.

In fact, this is not true at all, since the lions have their tongues, but they were deliberately made invisible to the passers-by from the level of the pavement. The sculptor, also known for working on the sculptures of the Vigadó and the MTA, confirmed this news. For those who made fun of him, he responded ironically:

“Would that your wife had such a tongue as my lions!”

3. The Matthias Well and a less known woman

While walking along Buda in the Palace district, you can catch a glimpse of the Matthias Well. As Guideathand.com reports, the “crown” of the Buda Palace was made by Alajos Stróbl in 1904. It commemorates a hunt of the famous Hungarian king, Matthias Hunyadi.

By going closer to the sculpture, you can see that besides the figures of men, a woman is also represented. This is Ilonka Szép who lived during the reign of King Matthias. As it is widely known, Matthias loved going hunting disguised and during one of his hunts, he met the beautiful Ilonka. The girl immediately fell in love with the king unaware of his real identity. It was only later seeing him once in Buda that she realised who he really was. She became very sad since her love could not be fulfilled.

As the legend goes, Matthias wanted to visit the lady, but by the time he arrived, she had already died. The sculpture, built in Art Nouveau style, commemorates this magical and tragical story as well. Just to paint a full picture of the well, on the left side, Galeotto Marzio, the famous chronicler, sits with a falcon while on the upper level, the king’s henchman and the master hunter can be seen.

4. The Citadel and the enigmatic woman figure

Who is the woman towering above the whole capital? The history of the Hungarian Liberty Statue also gave birth to numerous legends. The 1st difficulty which we face is the name of the person who commissioned the construction of the fortress. A legend circulates about Horthy commanding the construction of the statue to commemorate his son, István Horthy, dying during military service. His plane crashed in 1942, and he died due to the serious injuries. This story gave rise to the rumour that originally, István Horthy would have been the model for the statue on the Citadel.

Another legend mentions that the woman up on the hill is the daughter of Kisfaludy, but it also proved to be false.

Actually, The idea of setting up a statue was born in 1945, reports Funzine.hu. Its model was Erzsébet Thuránszky, and it was made by the sculptor Zsigmond Kisfaludi Strobl who, by the way, also made 3 Horthy statues 🙂 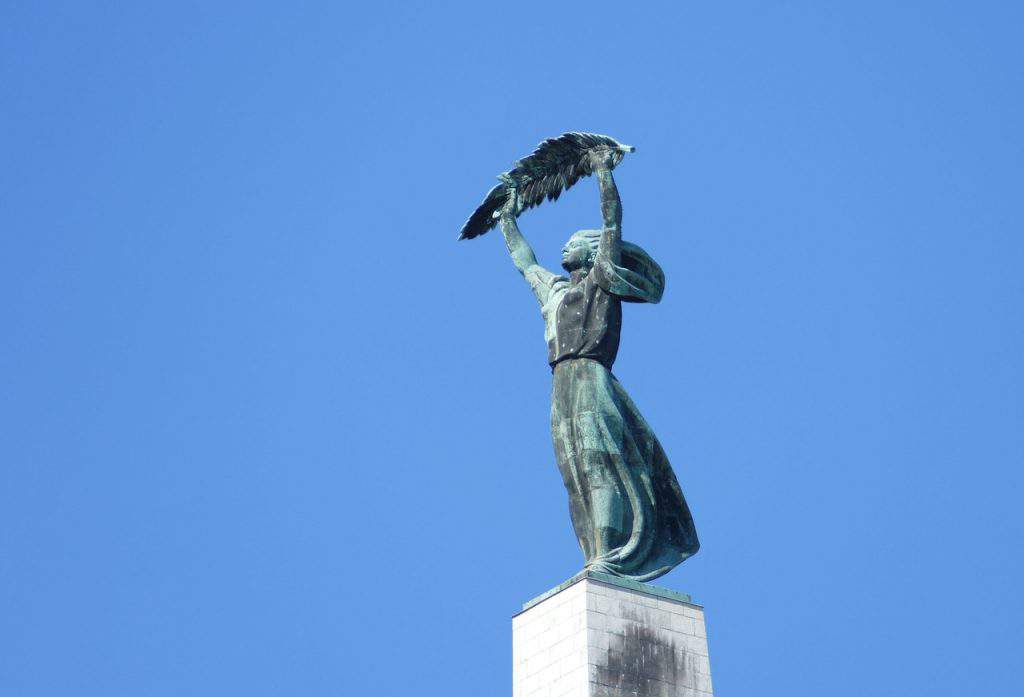 To work on the statue, Strobl travelled from Sopron to the capital, and it is here that he bumped into Erzsébet Thuránszky and asked her to be the model for his sculpture. The woman’s first thought was that Strobl is a satyr who wanted to bother her, but eventually, she accepted his proposition. In fact, the lady did not want and did not get anything in return, but she had to cut her hair off. While the artist was working, the lady had to hold a palm branch for hours, and a ventilator blew the air to help the artist illustrate how the wind catches the woman’s dress.