On June 19, the European Parliament adopted Resolution 2019/2209(INI) based on the report by the rapporteur, MEP Petras Auštrevičius. The document was the European Parliament’s recommendation to the Council, the Commission and the Vice-President of the Commission / High Representative of the Union for Foreign Affairs and Security Policy on the Eastern Partnership (EaP), in the run-up to the June 2020 Summit.

The Resolution was adopted amid the joint summit of the EU Council and the heads of EaP states. Six ex-Soviet nations – Azerbaijan, Armenia, Belarus, Georgia, Moldova and Ukraine – are parties to the Brussels-initiated program which aims to deepen cooperation with its neighbors to the East. President of Azerbaijan, Mr. Ilham Aliyev, among the other leaders, spoke at the summit, which for the first time was held in the format of a video-conference.

The resolution which was adopted on the next day after the summit, opened the new chapter in the EU policy towards the EaP nations. 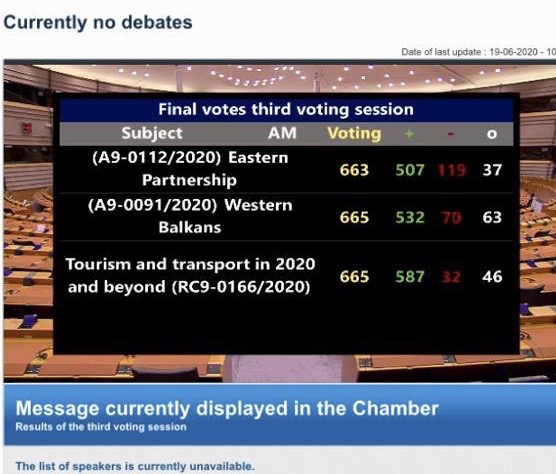 Of course, there are many interesting points in the document, however, the most important for Azerbaijan as a country partly occupied by Armenia are the items concerning the regional conflicts.

The resolution clearly emphasizes the EU’s full support of the political independence, sovereignty and territorial integrity of the EaP countries within their internationally recognised borders. This is very important, considering that Armenia as a country that has tried for decades to hide her illegal military occupation of Azerbaijan’s Nagorno-Karabakh region behind the “right to self-determination” curtain, continues to (mis-)use this liberal terminology to justify her aggressive behavior. This country has ignored the call by the UN, OSCE, PACE, EU, NATO, Non-Aligned Movement and a number of other international organizations to quit this unacceptable behavior. Instead, it appeals to the notion of “self-determination” despite the international community’s firm reference to the 1975 Final Helsinki Act, which draws strict limits of the right to self-determination by the boundaries of territorial integrity of states! And the fact that the letter and spirit of the recent resolution fully supports territorial integrity of states within their internationally recognised borders and does not mention even once the right to self-determination, serves as a clear message to Armenia that the Final Helsinki Act cannot be misinterpreted for the justification of aggression and occupation. By doing so, the EU has unequivocally rejected unilateral secession.

MEPs through the adopted resolution demanded the immediate withdrawal of all the occupied troops from foreign territories.

As far as Azerbaijan is concerned, it is obviously Armenia whom this call is addressed.

The European Parliament once again underlined that the unresolved conflicts in the EaP countries undermine not only regional security but also human rights situation, obviously, having in mind millions of refugees and IDPs awaiting return to their homes. As a result of the Armenian invasion, more than one million Azerbaijani citizens were expelled from their ancestral lands. The stage-by-stage settlement of the conflict drafted by the Co-Chairs of the OSCE Minsk Group envisages the final legal status of the occupied region to be negotiated after the return of the Azerbaijani community of Nagorno-Karabakh to their homes and their full reintegration into economic and social life of the province. This explains the recent rejection by international community, including the EU, of the legitimacy of the so-called “elections” in the Armenia-occupied region.

Last, but not the least, the European Parliament having confirmed the EU’s commitment to the sovereignty, political independence and territorial integrity of the EaP countries within their internationally recognised borders, reiterated its support of the efforts to fully enforce those principles and called for unity and solidarity among the EU member states in this regard.

This is something really new and very important. Until now, international organizations merely urged the conflicting parties to work out formulas for peaceful settlement based on mutual compromise. This always sounded somewhat vague, while giving the countries-occupants additional incentive to torpedo negotiations and freeze the conflicts. The change of the language from a mere call to the support of efforts to enforce territorial integrity is yet another remarkable message to the countries-aggressors that occupation is not sustainable and a day can (and probably should) come when sovereignty will be enforced, and not begged for.

The question now is, will the politicians in Armenia hear these strong messages. Time is running out.