Árpád Lengyel, the Hungarian doctor who saved the survivors of Titanic

Árpád Lengyel used to be as famous in his time as Ignác Semmelweis, the “saviour of mothers”; but historic remembrance treated him badly, people soon forgot about him. However, he played a very important role on the 14th and 15th of April, 1912, when, as the sea-surgeon of Carpathia, he saved the lives of 705 people who were lucky enough to get into lifeboats from the sinking Titanic that was thought to be unsinkable. People only came to know his story in the 1980s.

Árpád Lengyel was born in 1886 in Pilismarót. He first studied laryngology and started working in a hospital at a young age, while simultaneously continuing his studies as a paramedic officer. In 1912 he applied to the Cunard Line association, who were looking for a Hungarian doctor who spoke good English, as the medical problems occurring on emigrating ships were very serious in that time (the high number of the Hungarians emigrating to the USA was a serious social problem in Hungary at the turn of the 19th and 20th century).

The doctor was put onto Cunard Line’s Carpathia ship and their first route was a Fiume-New York-Fiume route. The way there was completely successful, but when they were coming back Titanic’s distress signal came in on the 15th of April at 0:25 AM. Doctor Lengyel had an important role in the saving of the survivors, as only he had experience as a paramedic officer, out of the three doctors on the Carpathia. He was put to the door where the shipwrecked were lifted in and he had to select the 705 survivors according to their injuries. He wrote in his memorial that “we could barely keep up with the work and the comforting we had to do”.

“People who were sitting in the first lifeboat were frozen to the marrow, so we lifted them to the deck in a powerless condition. We gave them coffee, cognac and warming massages. Even though I am a doctor who is used to horrible situations, what I saw was beyond my wildest dreams… Some people wore evening gowns, some wore pyjamas, but they were all in shock. Many of them were injured; they probably injured themselves while jumping off Titanic” as the doctor told the New York Times a few days after the catastrophe. 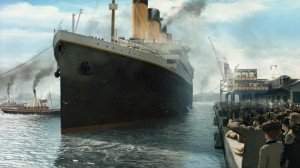 “There is no danger that Titanic will sink. The boat is unsinkable and nothing but inconvenience will be suffered by the passengers.”
-Phillip Franklin, White Star Line Vice-President

Mult-kor.hu writes that the sinking of the Titanic and the tragedies experienced completely changed the life of Árpád Lengyel. It was a real spiritual trauma for him, so he never really talked about his story again. Also, he never put out to sea again. He became only acknowledged abroad. Although, there were a few articles published about him and Archduke Joseph and Archduchess Augusta even invited him for a dinner, he was only awarded by the ambulance in Hungary: he got an iron merit, which was the biggest acknowledgement in his profession.

The doctor died in 1940 and his memory slowly fell into oblivion. People only came to know the story in the 1980s, when Robert Ballard, American oceanographer quested the Titanic. Still, it was more about the story of the Titanic, not about the saving process. Even though his memory is still guarded in small circles, the name and the story of Árpád Lengyel reaches more and more people.