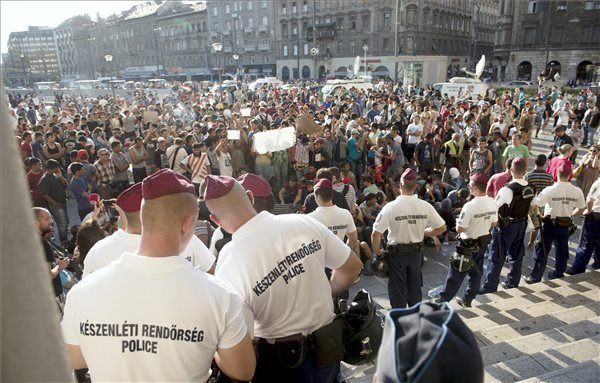 All entry points to the station are manned by police. Train services are running, however, and ordinary passengers are being allowed onto platforms.

The sunken plaza in front of the station and areas surrounding the station are full of migrants. Around 50-100 were demonstrating and shouting “Syria”, “Germany” and UN.

Migrants also demonstrated along the train tracks at Budapest’s Kobanya-Kispest station, prompting police intervention. The group objected to being put on a train to the city of Debrecen’s reception centre. An MTI correspondent at the site said up to 100 migrants occupied platform with police among them.

Asylum-seekers who have submitted an application at this stage of the asylum process may move freely in Hungary, according to a statement by the police headquarters (ORFK). But they must report at a reception centre within 24 hours for their request to be examined, it added.

Budapest, September 2 (MTI) – Planned legal amendments to allow army mobilisation in connection with the migrant situation and making illegal border crossing into a crime will bring back practices from the Communist era, the Hungarian Civil Liberties Union (TASZ) said in a statement on Wednesday.

TASZ said lawmakers should not approve a law that “disregards the basic requirements of constitutionality” even on the premise that a large number of migrants are arriving in Hungary.

TASZ said the proposed amendments submitted to parliament seek to introduce legal restrictions that are unconstitutional. For instance, during a “crisis situation resulting from mass immigration” police would be authorised to enter private homes without a permit if it is assumed that illegal migrants are staying there. This means police could break into the home of any Hungarian who gives shelter to migrants, it said.

The proposal includes the possibility of a prison sentence for those who enter Hungary through the razorwire border fence, damage the fence or hinder its construction. All migrants could then be classified as criminals, with the possibility of expelling them from the country — even at the cost of tearing families apart, the statement said.

According to TASZ, if the amendments are approved, the army will have recourse to use force not only to prevent violent acts but also in any action seeking to manage masses of migrants. The law will allow soldiers use of equipment which can cause bodily harm such as rubber bullets, nets, pyrotechnical equipment and tear gas, it added.