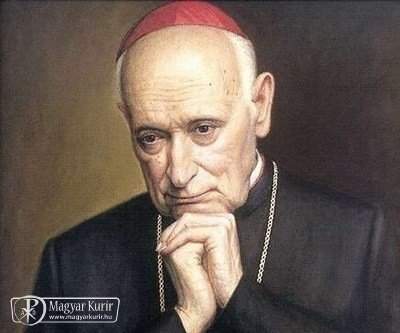 Budapest (MTI) – The beatification process of the late Cardinal József Mindszenty is on track and the written proposal and testimony of his life is now officially before the competent Vatican congregation, Cardinal Péter Erdő, Archbishop of Esztergom-Budapest said on Friday.

The Hungarian Catholic Church recently submitted new documents to the Vatican in connection with Mindszenty’s miraculous recovery, Erdő told public Kossuth Radio on the occasion of the upcoming anniversary of Mindszenty’s death on Saturday.

The next step in the process, the theological commission’s review of the documents summarising the life and virtues of Mindszenty is scheduled for next year. The commission will then have to submit a recommendation for beatification to the Pope.

Mindszenty was appointed to Bishop of Veszprem by Pope Pius XII in 1944. Protesting against the Nazi genocide, he was arrested in late 1944 and kept in prison in Sopronkőhida. Following World War II, he was appointed to archbishop of Esztergom, then to cardinal.

In late 1948 he was arrested illegally by the communist authorities and sentenced to life imprisonment under false charges of conspiracy, espionage and financial abuse. The sentence brought protests from the Pope and leaders of western powers. In April 1949 it was criticised by the UN General Assembly, too.

The physical and mental trials and tribulations of his prison years came to an end after the 1956 revolution broke out. Giving a radio speech on November 3, Mindszenty stressed the idea of national independence and democracy. On November 4, 1956, the first day of Soviet intervention, the cardinal took refuge in the US Embassy in Budapest. Threatened with arrest, he could not leave the building until 1971.

Mindszenty was then allowed to leave Hungary under an agreement between Hungarian authorities and the Vatican. The cardinal first went to Rome before settling in Vienna. He died in 1975 and was buried in Mariazell, Austria.

After Hungary’s Supreme Court declared him innocent in May 1990, his remains were returned to Hungary and reburied into the crypt of the Esztergom Basilica.