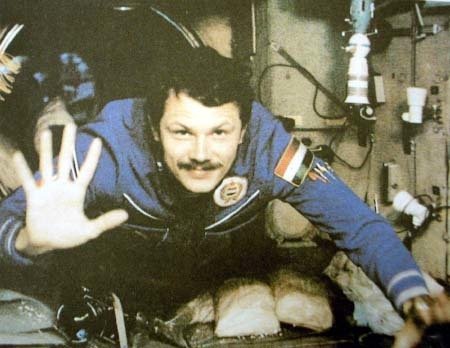 Bertalan Farkas is a famous name in Hungarian astronautics. He is the first Hungarian cosmonaut who has ever been to space. This unprecedented success of the Magyarspace travel took place back in the 1980. Without shadow of a doubt, Bertalan Farkas has marked the beginning of a new era in Hungarian aerospace research and aerospace science in general.

Bertalan Farkas was born on the 2nd of August 1949 in the town of Gyulaháza, in the east of Hungary. During the school years he had a strong passion for football. Local coaches saw Farkas as a very talented young man and even suggested he should pursue a serious career in sports. However, in high school Farkas realized he was very intrigued by the aviation. He knew that there is no age limit on life-changing events and decisions; he was determined to continue exploring the endless opportunities of the space.

Bertalan Farkas was so fascinated by the nature of aviation that he became a member of a local club, where participants were practicing parachute jumps and even flew gliders.

After the high school (1967) Farkas enrolled into the George Kilián Aeronautical Collegein Szolnok. At the end of the second year in college Farkas made a decision, which altered the course of his life forever – he was about to continue education in the Krasnodar Military Aviation Institute, in Soviet Union. In 1972 Farkas has successfully graduated from the university and moved back to Hungary.

Right after his return, Bertalan Farkas has joined the Hungarian Air Force. Because of his ambitions, impressive dedication and a naturals gift, Farkas soon was recognized as one of the best pilots of the wing. In 1976 he was honored to receive a qualification of the military pilot of the first class.

In 1978 Bertalan Farkas alongside another Hungarian pilot, Béla Magyari, volunteered to participate in the upcoming fifth international program – Intercosmos. Subsequently, he was appointed as a CR (Cosmonaut Researcher) on a Soviet Soyuz 36. On the 26th of March 1980 along with a Russian astronaut Valeri Kubasov, Farkas was launched into space from Baikonur Cosmodrome.

He has conducted important research and experiments in material science. He made a tremendous contribution to the development of the Hungarian astronautics and astronautics in general. Immediately in 1980 he was awarded the title Hero of the Soviet Union.

The famous astronaut, who is now in his sixties, has accomplished an impressive journey from a rural childhood to becoming a legend of the Hungarian nation.

His achievements will undeniably be remembered by all the generations and most certainly deserve thunderclaps of applause.