As the weather is getting better and better, the season of outdoor programmes returns. If you don’t know what to do at the weekend, let us recommend you something. How would you like the combination of unearthly flavours, blazing fire, and good company? Well, this is the experience that bográcsozás, the Hungarian tradition of outdoor cooking has in store for you.

According to magyarvagyok.hu, one of the reasons why the Hungarian cuisine is acknowledged all over the world is because it was never set in stone. It is still being shaped by our chefs, housewives, food lovers, who successfully and creatively incorporate the traditions of other nations.

The specialty of traditional Hungarian meals lies in the basic steps. We use lard in a roasted form, which is a unique way of starting meals. Then come the onions, which we don’t spare, and the paprika – this is the base of most Hungarian stews, soups. In the end we top these meals with a dairy product that is unknown to most European countries (or at least our version of it): a type of sour cream, the beloved tejföl.

Traditional dining starts with a hearty soup, which is made from a diverse variety of ingredients: beans, cabbage, potatoes, pasta, peas, carrots etc.

This is sometimes followed by sweet pastas that are quite surprising for foreigners. Hungarians like to eat pasta with fruits, jam, poppy seed, and walnuts, topped off with powdered sugar.

Instead of pastas you could go on by trying another curiosity, what we call főzelék, which is basically a thick soup made from one kind of vegetable, these vegetables can be even ones that other nations would never think of as something that can be cooked.

A special episode in our gastronomy is cooking over open fire, which we call bográcsozás. The name comes from bogrács, the kettle we use to cook the meals in. Even though it takes quite a lot of practice and preparation, the final result is divine and incomparable. Several of our one-pot dishes originate from this tradition of outdoor cooking. 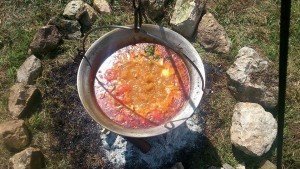 The use of the kettle can be traced back to the nomad horse-cultures. The early medieval Eurasia can be divided into two gastronomic parts. While the region between the Far East and the Black Sea was dominated by cooking methods, the westward region from the Black Sea was dominated by frying, roasting methods, especially in the sacrificial ceremonies. The traces of these traditions can still be found in these regions, for instance, the cooking, steaming, roasting methods in the East.

And the most obvious tool for outdoor cooking was/is the kettle that can be hung over the fire.

The ancestor of today’s bogrács, the earthen kettle was brought to the Carpathian Basin by the first Magyars.

It was the most common pot of 10th-13th century Hungarian pottery. Based on the finds of archaeologists, the traditions of its making originate from the Don region.

The word bogrács has Ottoman-Turkish roots (bakraç – copper kettle) even though it’s only used from the 1700s.

The metal kettle also appeared in the late medieval times, when economies, societies, settlement structures were changed by the norms of feudalism. Some written documents from 1420 say that the iron kettle belonged to the serf house.

The cast-iron kettles spread in the middle of the 18th century, thus replacing copper kettles.

The shape of the Árpád era earthen kettles was determined by their usage. The walls which grew narrow inwards were created so that the fire wouldn’t burn the rope that held the kettle. The shapes of the kettles changed with time. For instance, the ones used in the Great Hungarian Plain and Transdanubia were deep bowls that had splayed edges, except for the pear-shaped iron kettles used in the southern region of Transdanubia. The kettles used in Transylvania were hemispheric.

Even though he is often forgotten, having to live in the shadow of Ferenc Puskas,…
OTP Prime Real Estate Investment Fund has fully acquired Corvin Technology Park…
A new scholarship programme by the government, regulated by the Tempus Public…
We and our partners use technologies, such as cookies, and collect browsing data to give you the best online experience and to personalise the content and advertising shown to you. I accept
Privacy & Cookies Policy