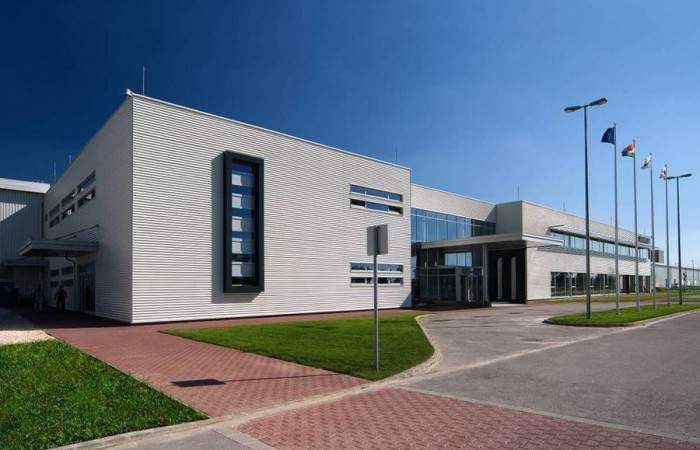 Bridgestone has completed its development program and inaugurated its Tatabánya plant extended by an 85 billion Forint investment. As a result of the development, inaugurated today by Prime Minister Viktor Orbán, the Hungarian subsidiary of the world’s largest tyre and rubber product corporation has doubled the floor size of the factory, increased production capacity from an annual 1.8 million to 3.6 million tyres, and tripled the number of employees.

The company has introduced digital manufacturing technology unique even by European standards to its Tatabánya plant,

where it also conducts R&D and manufactures close to half of the available sizes of the DriveGuard tyre, one of its most advanced products.

In 2008 Bridgestone Tatabánya Manufacturing Ltd. began production of ultra-high performance car and SUV tyres in over 230 sizes for vehicles mainly in the premium category. The company decided to make a capital investment totalling 85 billion Forints (276 million Euro) back in 2013, in order to develop its Tatabánya factory after signing the Strategic Agreement with the Hungarian government.

and has also installed the internationally most advanced manufacturing technology at the new facility.

Out of the Bridgestone’s factories in the world, firstly it is the Tatabánya plant that operates new type of mixers, which produce more consistent quality compound for tyres manufacturing. In Europe, following Japan, the Hungarian factory is the first to use the new, artificial intelligence-based EXAMATION digital technology in manufacturing, which checks and analyses the tyres at 480 different points in order to ensure timely and flawless production and the high quality of the products. The fully automated storage, for the tyres to-be vulcanised, with capacity up for 70,000 tyres, as well as a final inspection and palletizing system, which enables the company to performing the delivery processes more efficiently and more accurately, are also unique technologies.

‘Our company has decided to implement this significant capacity and technology development in Tatabánya because, thanks to the investor-friendly economic policy, the automotive industry has grown dynamically in Hungary, which our company intends to supply.

Our aim is that more and more vehicles manufactured in Hungary run on Hungarian tyres,

and this development supports us in providing superior quality products and services to our European and Hungarian customers’ – said Adolfo Llorens, Senior Vice President of Manufacturing at Bridgestone.

Capacity to double again by 2020

The development at the Tatabánya plant has increased its annual capacity from 1.8 million to 3.6 million tyres. The extended plant is expected to reach its peak capacity by 2020, when it will manufacture an annual volume of 7.2 million Bridgestone and Firestone tyres, the most popular brands among drivers.

“The newly completed development enables the plant to support R&D activities, in cooperation with the Rome Technological Center, in the area of new raw material development for tyres” – said Melinda Topolcsik, Chief Executive Officer of Bridgestone Tatabánya Manufacturing Ltd. “This is exactly why Bridgestone has selected Hungary as a location for manufacturing DriveGuard,

one of its most advanced tyres that has won multiple innovation and product awards and is engineered to allow you to continue driving 80 kilometres at up to 80 km/h even after a puncture” – added Melinda Topolcsik.

In parallel with the increase in production, the number of employees at Bridgestone Tatabánya has also risen. Before the expansion, the company only had 361 employees. Currently, it has close to 1100 workers, which makes

Bridgestone to be one of the major employers in Komárom-Esztergom County.

80% of the employees work as operators and technicians. The company was one of the first to develop and introduce a progressive wage and career model under which, subject to productivity and personal performance, current employees can increase their income by as much as 40 per cent in 3 years.

The company exports its products made in Tatabánya to European (Germany, Poland, Italy, Spain, France and Turkey) and overseas (Mexico, the USA and Japan) markets.