Budapest in the Expat City Ranking 2020

InterNations, the world’s largest expat community with around 4 million members, publishes its Expat City Ranking 2020. It is based on the annual Expat Insider survey, which is one of the most extensive surveys about living and working abroad. This year, more than 15,000 expats participated in the survey.

In 2020, 66 cities around the globe are analyzed in the Expat City Ranking, offering in-depth information about five areas of expat life: Quality of Urban Living, Getting Settled, Urban Work Life, Finance & Housing, and Local Cost of Living. Taken together, the first four areas make up the Expat City Ranking, which reveals the best and worst cities for expats to live in.

As the data was collected in March 2020, just before COVID-19 turned into a global pandemic, one question, however, remains: Will these cities still come out on top in a post-COVID world?

Hungary lands in the lower half of the Environment & Sustainability Ranking (35th out of 60 countries) ranking below average for most factors featured in the survey. It does best in the Quality of Environment subcategory (32nd): Expats rate the factor water and sanitation better than the global average (76% positive ratings vs. 72% globally). However, only three in four respondents (75%) like the natural environment in Hungary (vs. 82% globally), and less than half (49%) are satisfied with the air quality (vs. 62% globally).

Hungary places 34th in the Products & Utilities subcategory, with around four in seven expats (57%) expressing their satisfaction with the country’s waste management and recycling measures, which is also just below the global average (60%).

And there are also fewer expats who are happy with Hungary’s energy supply (57% vs. 62% globally) and the availability of green goods and services (59% vs. 63% globally).

Lastly, the country performs rather poorly in the Policies & People subcategory (38th): according to expats, the population does not seem to be very interested in environmental issues (33% vs. 30% globally). Moreover, the government does not appear to be supporting policies to protect the environment either, with only 36% of expats agreeing that they do (vs. 55% globally).

Out of 66 cities in the Expat City Ranking 2020, Budapest comes in 43rd. The Hungarian capital receives its best results in the Local Cost of Living Index (7th): nearly three in five expats (58%) rate the cost of living positively (vs. 46% globally).

A Canadian survey respondent shares that “the cost of living is very affordable for the salary I earn.”

Ranking 43rd out of 66 cities in total, Budapest ends up well in the bottom half of the Expat City Ranking 2020. The Hungarian capital receives its best results in the Local Cost of Living Index (7th): nearly three in five expats (58%) rate the cost of living positively (vs. 46% globally). A Canadian survey respondent shares that “the cost of living is very affordable for the salary I earn.” The city also performs well in the Finance & Housing subcategory (21st), with about two-thirds of expats (66%) saying that it is easy to find housing in Budapest (vs. 55% globally), and 43% rating the affordability of housing positively (vs. 41% globally).

Budapest’s performance in the Quality of Urban Living Index (37th) is rather mixed, the city performing well for transportation (4th) but poorly in the Health & Environment subcategory (57th). “The public transportation is amazing and convenient,” says a South African expat. In fact, all expats (100%) rate Budapest’s public transportation system positively (vs. 66% globally). But Hungary’s capital is nearly the worst for the local availability of healthcare (65th), only ahead of Dublin (66th). Close to three in ten expats (28%) rate this factor negatively (vs. 14% globally).

The Urban Work Life (51st) and Getting Settled (54th) Indices are Budapest’s weakest points. Only 45% of expats describe the local residents as generally friendly (vs. 68% globally), and 31% find it hard to get used to the local culture (vs. 21% globally). According to an expat from Greece, “most locals are not very sociable towards foreigners”. 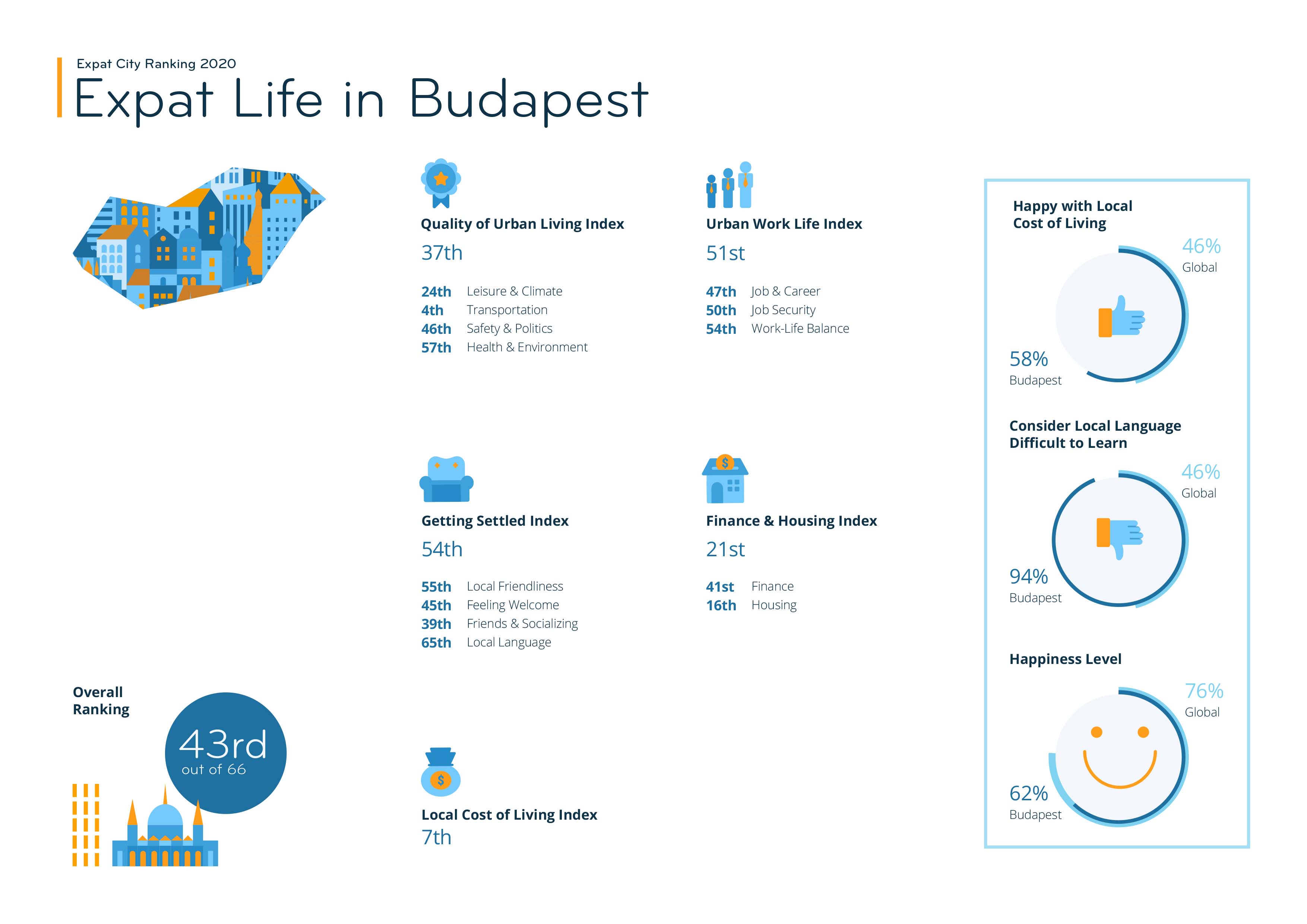 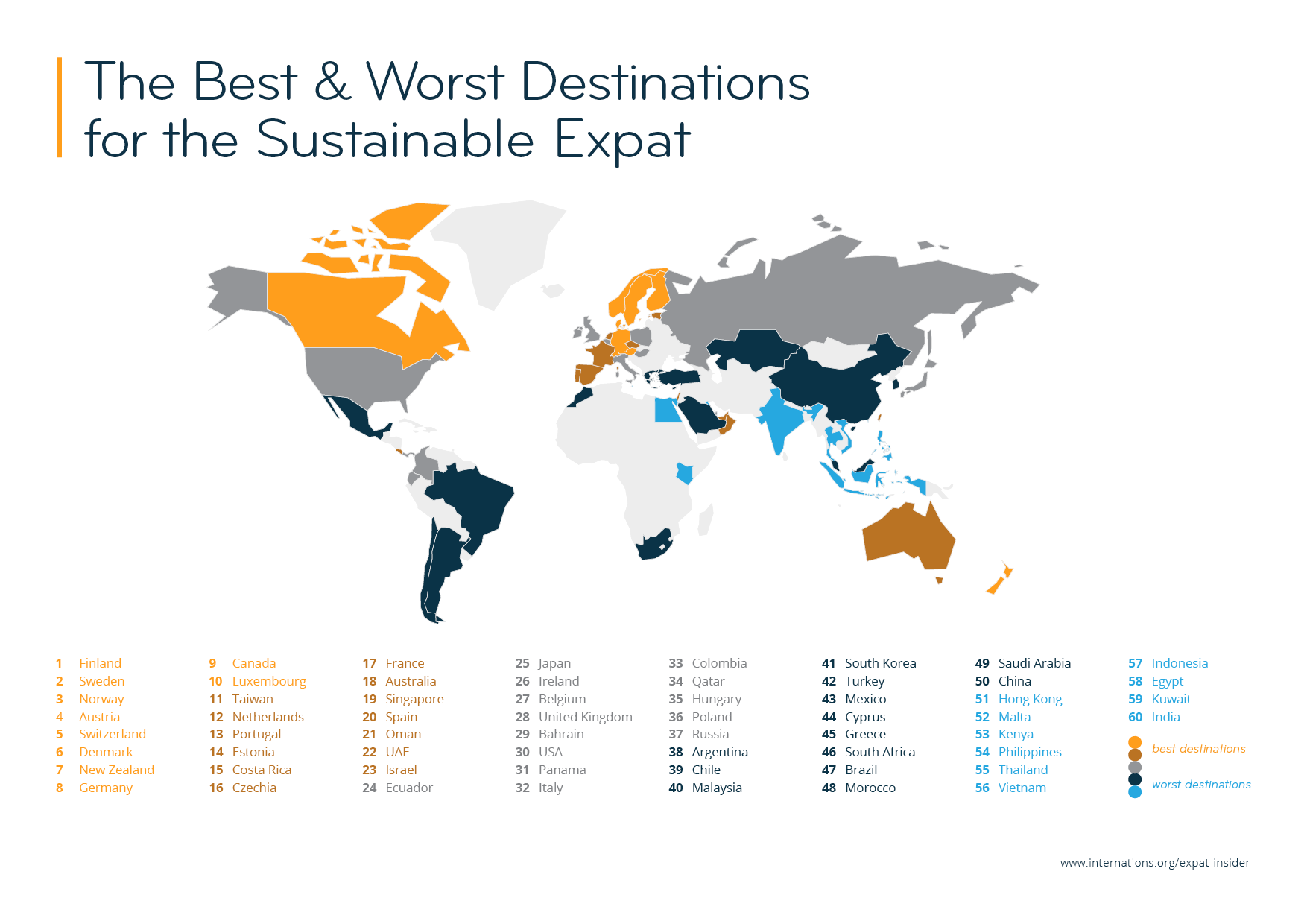 About the Expat City Ranking 2020

The Expat City Ranking is based on the annual Expat Insider survey by InterNations. For the survey, more than 15,000 expatriates representing 173 nationalities and living in 181 countries or territories provided information on various aspects of expat life. In addition to their satisfaction with life in their host country, respondents were also invited to share their opinions on the city they are currently living in.

Participants were asked to rate more than 25 different aspects of urban life abroad on a scale of one to seven. The rating process emphasized the respondents’ personal satisfaction with these aspects, considering both emotional topics and more factual aspects with equal weight. The respondents’ ratings of the individual factors were then bundled in various combinations for a total of 13 subcategories, and their mean values were used to draw up four topical indices: Quality of Urban Living, Getting Settled, Urban Work Life, and Finance & Housing. These were further averaged in order to rank 66 cities worldwide. In 2020, the top 10 cities for expats are Valencia, Alicante, Lisbon, Panama City, Singapore, Málaga, Buenos Aires, Kuala Lumpur, Madrid, and Abu Dhabi. The survey also includes a Local Cost of Living Index, which does, however, not factor into the overall ranking to avoid overrepresenting financial aspects.

For a city to be featured in the Expat City Ranking 2020, a sample size of at least 50 survey participants per city was required.