The fact that the weather is turning gloomy should not deter you from visiting the astonishing Hungarian capital city, Budapest. There is a lot awaiting you, especially if you’re interested in art and culture, so bear with us, because we are going to present such programmes in this new series.

Have you ever been to Budapest? Or, at least, have you seen photos of this wonderful city? We’re sure you have, it’s hard to miss it. Now, you are familiar with the stylistic blend of the city’s architecture for which (apart from the Danube, of course) Budapest is famous. You must also be familiar with the main touristic sights, such as the Buda Castle, the Citadel, the Parliament or the Heroes’ Square. These are all gorgeous sights to visit, but if you’re looking for more, then you will sooner or later turn to galleries, museums.

How about you start with contemporary art, more precisely with the Hall of Art? 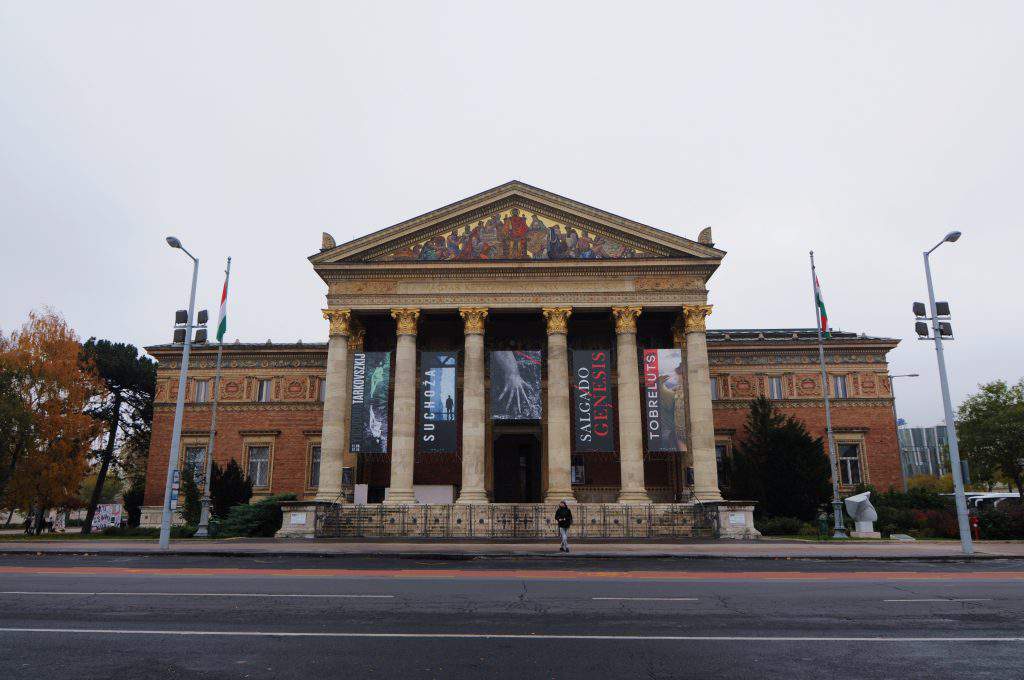 At the Hall of Art – or Műcsarnok in Hungarian – not just Hungarian, but international contemporary artists are represented, too. These exhibitions are not permanent; they usually change from month-to-month, or in three-month periods.

The Budapest Hall of Art operates following the guidelines of the German Kunsthalle, in the sense that

it is an artistic institution run by artists for the sake of art, maintains no own collection and being a non-profit organisation.

Thus, the artists have freedom in deciding what to put on display, which artist to invite, or what kind of conferences to organise, as they don’t depend on, let’s say, government organisations. The artists running the gallery, place the aesthetic value above everything else, not allowing ideology and age to put a constraint on the pleasures of art.

Exhibitions aren’t the only programmes taking place there, though. The Hall of Art organises academic conferences, film screenings (usually with subtitles in Hungarian or English, but not always), workshops and programmes for kids (the latter two take place only in Hungarian).

There are usually several exhibitions, all put on display in different rooms. We would like to highlight here the main exhibition area, which runs through an interconnected labyrinth of several rooms. These rooms are painted in different colours, which channel the mood of the photos or paintings.

The exhibitions are usually accompanied by sound effects and audio materials, such as recitals, and also visual materials.

The gallery offers guided tours, but only in Hungarian. However, the staff are all very kind and they are good English speakers (as far as our experience is concerned), so they will help you if you have any questions.

A glance into the past

Even though it is a contemporary art gallery, the roots take back to the 19th century. The Hall of Art was initiated by the Hungarian National Fine Arts Association in 1877. Back then, it used to reside at the Andrássy Street, but was relocated to the Heroes’ Square in 1896, so today it faces the Museum of Fine Arts (close to the City Park). It is argued that

the reason why it was moved to a different location was to celebrate the 1000th anniversary of the Hungarian conquest.

Its original venue still serves the purpose of art, as it is the main building of the University of Fine Arts.

The museum building boasts of carefully detailed architectural design. The exhibitions take place in several rooms, the size of which if put together give 2300 square metres, making it the biggest exhibition venue in Hungary. There is also a conference room, a library, a gift and souvenir shop, a bookshop, a café (if the weather is nice it moves to the terrace in front of the entrance) and a no-fee cloakroom, so that you won’t be bothered by your coat or luggage, if you happen to be in a hurry. 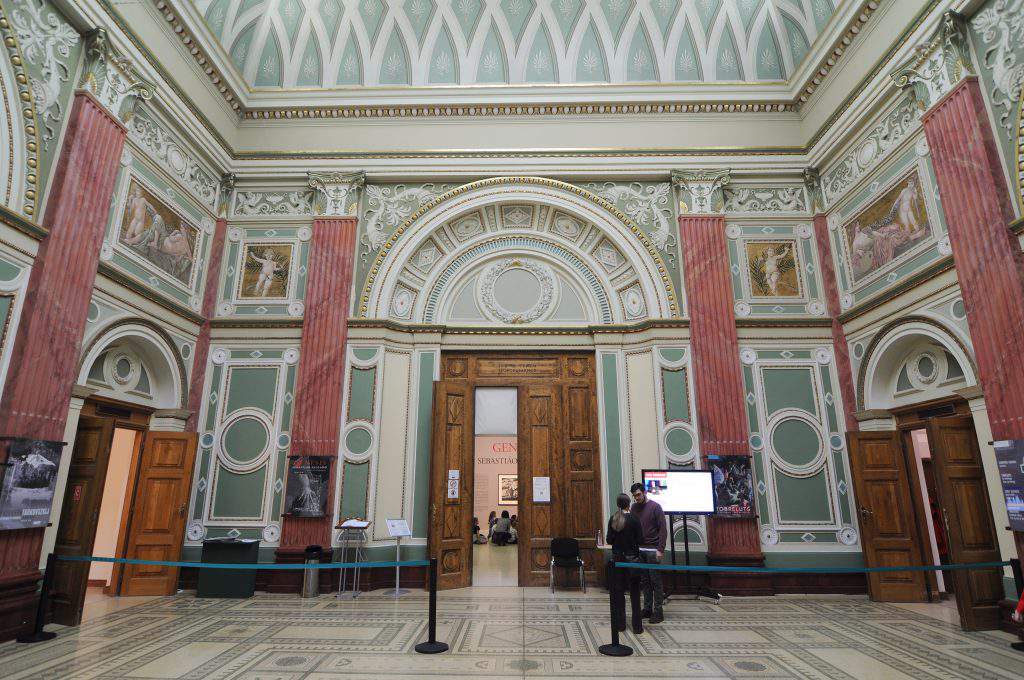 Its current venue was designed by Albert Schickedanz, and its exterior design resembles mainly the Eclectic and Neoclassical architectural styles. The front gate and the pillars are heavily influenced by Ancient Greek art.

The contemporary art displayed and the (neo-)Classical design work together harmoniously, creating a unique atmosphere.

The entrance hall is of classical design, while the exhibition rooms showcase the contemporary minimalistic design tendencies. It is an interesting experience to step inside the entrance hall and to be swiftly plunged into a different dimension as soon as you start your tour around the exhibitions.

The most attractive thing about its design plan is the main exhibition hall. This room’s roof is open (it has windows, of course), allowing natural light to playfully sneak in and either light up the whole room or to create a mysterious atmosphere just to light up given pieces in an out-of-the-ordinary way.

It is a must! Even if you don’t plan on walking through the exhibitions, you can still pop by and admire the entrance hall and its sophisticated decoration. Still, we recommend visiting the whole gallery, as

the pieces displayed always have a message, concerning contemporary life and issues, both on a small, personal scale, and on a grand, global scale.

It is an uplifting experience to be able to walk through the warmly-coloured rooms, that are bright, but not too imposingly lit. If you happen to visit the main exhibition, then you will be surely enchanted by the colour transitions between the separate sections. The contemporary, minimalistic, bare atmosphere of the halls allows you to concentrate on art itself and how it resonates with you.

We’ve visited all four exhibitions that were on display at that time, but, unfortunately, only one of them is still on display. These are our brief impressions, trying not to reveal too much.

New Mythology by Olga Tobreluts: the Russian graphic artist’s pieces were grouped by themes and topics, exploring the depth of human feelings, Greek and Roman mythology, and the 21st century pressures of pop culture. It was not an easy piece, at first looking like a joke, but if you take a second look, you realise that she has a serious message to convey. (Virtual tour available)

Interface by Jozef Suchoža: the Slovakian artist’s exhibition did not present too many art pieces, but what it did present to us were serious issues regarding the 21st century youth: the trends forced upon them slowly empty their ambitions and make them think, feel, look the same. (Virtual tour available)

Genesis by Sebastião Salgado: this was the main show. No photos could be taken in this venue, but the Brazilian social documentary photographer totally swept us off our feet. Decades of his work from all across the globe were on display, focusing mostly on nature and how mankind comes into contact with it. (virtual tour available)

Tarkovsky: The Mirror of Memories: this show is still on display until the 10th of December. It is a photography collection, revolving around the family of the famous Russian poet Arseny Tarkovsky and his son, the director Andrei Tarkovsky. You get the hang of how the members of the family interacted with each other and on what values they placed importance. This exhibition is accompanied by recitals of the poet and extracts from the director’s most famous and most touching film, The Mirror.