In 1846, on the exact spot of today’s Nyugati (meaning Western in Hungarian) railway station, Hungary’s very first railway station called Pesti Indóház (Pest Station) was finished and put to use. Back then, the rails connected only Pest and Vác. A couple of years later, one could travel as far as Bratislava. Problems emerged in 1871 when the constructions of the Grand Bouvelard of Budapest started, and Pesti Indóház, the first railway station of Hungary, had to be demolished due to executional problems.

There was a need for a new railway station on the location of the old one. Austrian August De Serres designed the blueprint for the new railway station in 1873. A few years later, in 1875, construction started and was executed by the Eiffel Company, the same company who built the Eiffel tower in Paris. Of course several Hungarian companies aided the construction as well. Interestingly, the new steel train shed was constructed on top of the previous station, which was demolished only after the new station was completely finished. This was executed this way so that construction did not disturb railway traffic. 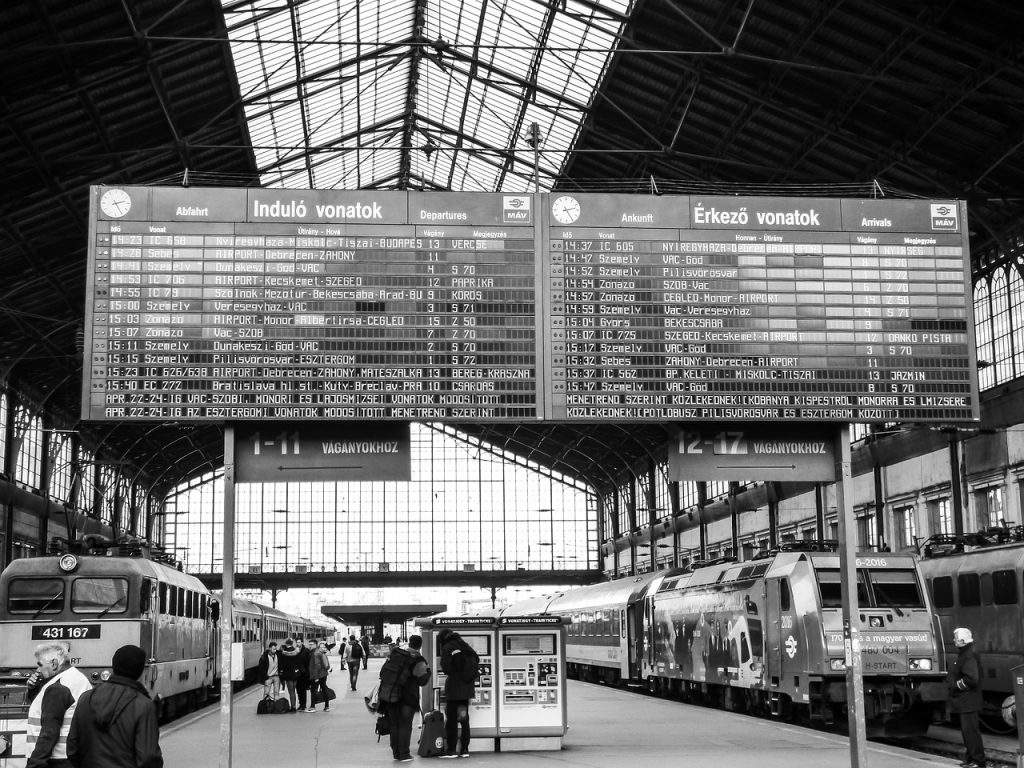 The finished railway station was presented in 1877. Its built-up area was 14,390 square metre (m2) and the ironwork that was used to build the whole weighed around 1500 tonnes. Same as today, the train shed was surrounded by two buildings in which the waiting halls, the cashier’s offices and other halls dedicated to certain types of services were located.

The finished building, a monumental combination of glass and steel, was the biggest hall in the whole Austro-Hungarian Empire.

The railway station got its current name in 1891, when it became a possession of the Hungarian State Railways (MÁV). Surroundings of the railway station became densely populated within a short amount of time. Areas around railway buildings have always tended to be the centre of criminal activity, and it is no wonder that

the notorious hotel, Westend House that was rumoured to be the centre of prostitution and suspicious deaths, was located right next to Budapest Nyugati Railway Station.

The location of the railway station has been a sensitive subject for decades. Many debates were going on about whether it should be demolished and built up somewhere else (where less people live). The main problem was the massive pollution.

In 1975, Nyugati railway station was labelled to be life-threatening due to the toxic fumes. People finally realised that a careful renovation was needed, as no extensive renovation was done in the first 100 years of the station’s existence.

The renovation was completely finished by 1979. Since then, smaller remodelling of the station itself has been done, but there was no extensive reconstruction of the halls or the buildings that surround the train shed.