Communism “was an insane ideology”, says Orban at a commemoration

Budapest, November 21 (MTI) – No one today disputes that Communism, like National Socialism, was an insane ideology, Viktor Orban, the prime minister, said at a commemoration on Saturday.

At the event held to remember Hungarian political prisoners and forced laborers deported to the Soviet Union, Orban said that when the insane idea of National Socialism shook the world, and when a crippled western world recognised that its very existence was at stake, it stepped into an alliance with another crazy ideology, with international socialism, communism and its master. This is how the Soviet world broke into Europe, he said.

“With its own security in mind, the West handed over on a plate a significant portion of European freedom-loving peoples to the Soviet Union,” the prime minister said. “In the name of the entire nation, we commemorate the persecuted and we bow our heads to the deceased, express our respects and … take care of the survivors,” Orban added. 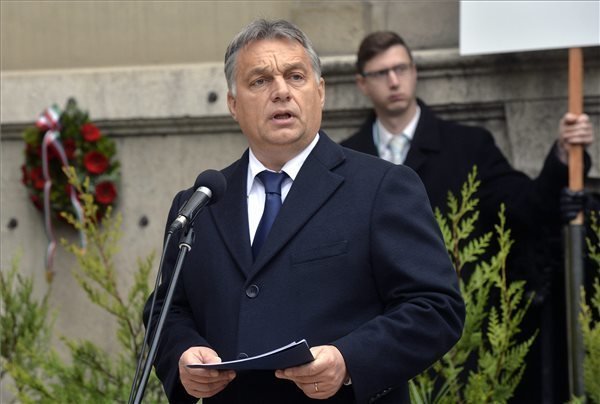 Many hundreds of thousands of Hungarians were transported to the Gulags; prisoners of war, civilians and political prisoners from the Carpathian Basin, he noted, adding that between the autumn of 1944 and 1948 only a fifth of them survived the ordeal.

In the two decades following the change of political system in Hungary “the right and left wings have separately carried their burden of history,” and the debate over whose burden is heavier endures, he said. The time came to close this period and thus 2015 became the national year of remembrance for political prisoners and forced laborers deported to the Soviet Union, he said.

The prime minister said it had been an uplifting feeling when finally it became possible to commemorate the victims of Communism. It is important, too, “especially now when Europe is again under attack” for Hungarian youth to take on board the ideological mistakes of the 20th century so as not to fall into the trap of repeating them, he said.

Also present at the commemoration was Peter Boross, a former prime minister (1993-1994), and several members of parliament.