Out of the facility’s 500 inmates some 300 supported the petition, and complained about their confinement and slow bureaucracy, the police said on its website.

A Syrian spokesman for the detainees encouraged the crowd to set off on a march on Budapest, but the police said it would prevent them from leaving the centre and “maintain public order and security”.

György Bakondi, the prime minister’s chief domestic security advisor, told public news channel M1 that the detainees involved in Wednesday morning’s “incident” demanded that they should be transferred to an open refugee camp and decision making concerning their asylum applications should be accelerated. 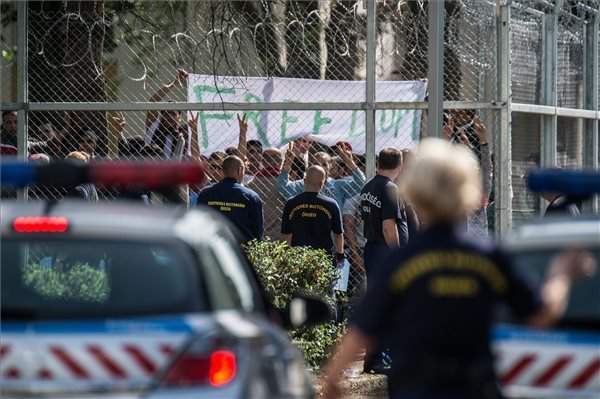 Bakondi said, however, that Hungary’s laws are “applicable to foreigners or migrants; procedural deadlines defined by law cannot be modified under pressure from the detainees, nor can they be transferred to open camps.” He added that detainees at “guarded facilities” were typically migrants sentenced by a court for “illegal entry or other crimes”, who have applied for asylum “to avoid expulsion”.

The chief advisor also said that negotiations with the migrants were under way and that they were “not likely” to break out of the facility or attack police.