Did you know that the wealthiest Hungarian is a Taiwanese businessman?

Frank Liu has a very good relationship with László Kövér, the speaker of the Hungarian parliament. He already has Hungarian citizenship and bought not only the Pápai Hús (a famous Hungarian meat-producing company) in the speaker’s hometown, but he also takes part in a huge real estate project in Budapest.

However, there is a Hungarian citizen whose wealth is much bigger than even Mészáros’s. He is Frank Liu, an entrepreneur from Taiwan, with

an estimated fortune of 1.5 billion EUR, and with an investment portfolio worth 20-25 billion dollars. 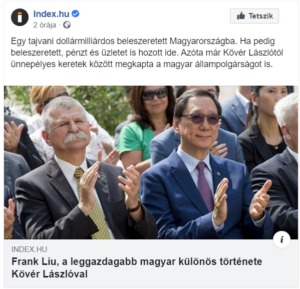 According to Index, everything started in 2017 when Mr Liu saw the Hungary-China water polo match together with Hungarian parliament speaker László Kövér at the FINA Women’s Water Polo World League in Shanghai. Since he realised that Mr Kövér likes water polo, he has donated 250 thousand dollars to the Hungarian water polo, Index says.

According to Index, Mr Liu was socialised on the American capital market and has special business plans in Hungary and China. Those who know him say that

two of his biggest strengths are networking and fundraising.

He studied in Taiwan and California and was convinced by Levente Székely, Hungary’s former representative to Taiwan, to come to the country and invest money there. Mr Liu did so and bought, for example, 30-40 flats in Budapest. And how did Mr Székely get in touch with the Taiwanese entrepreneur? According to 24, it was thanks to the many wine-tasting evenings they organised, in which Mr Liu regularly took part.

In 2016, Frank Liu’s Chi Fu Investment Group bought the Pápai Hús, a famous Hungarian meat-producing company which had already undergone the bankruptcy procedure those days. He spent 1.134 billion forints on it. Furthermore, Pápa is the hometown of the Hungarian speaker of the house, László Kövér. According to inside sources, the buying of the company was a gesture because it is not profitable at all.

Austin Jieh, the representative of the Chi Fu Investment Group, said to Index that the Taiwanese businessman would like to

This is because he – like many other Taiwanese investors – thinks that if China starts to grow its investment in the region, the Taiwanese will find it easier to negotiate with them than, for example, the Hungarians.

When he received Hungarian citizenship, he regarded it as an honour and award. Later, he created an investment fund together with the Hungarian Development Bank. Then, Mr Liu started to invest money in the Hungarian real estate market, and today, he is taking part in one of the biggest city development projects in Váci Street, the business heart of Budapest. He bought the opportunity from the Optima group that handles the foundations of the Central Bank of Hungary. Thanks to his investments,

other Taiwanese investors have become more active in Budapest lately.