Easter is closely related to the beginning of the spring and to the traditions in connection with fertility. Easter is also the feast of resurrection and rebirth, that is the time when the Christian Church commemorates Jesus Christ’s resurgence. It is a family and a religious holiday at the same time, to which a number of folk traditions and customs are bound. This article highlights the most common Hungarian Easter traditions then and now.

The traditional Easter meals are ham, braided loaf and boiled eggs. The ham is first eaten at Holy Saturday evening, at the end of the Lent. On Easter Sunday, most families eat the Easter meal with pickled horseradish. The festive food of this day is lamb. 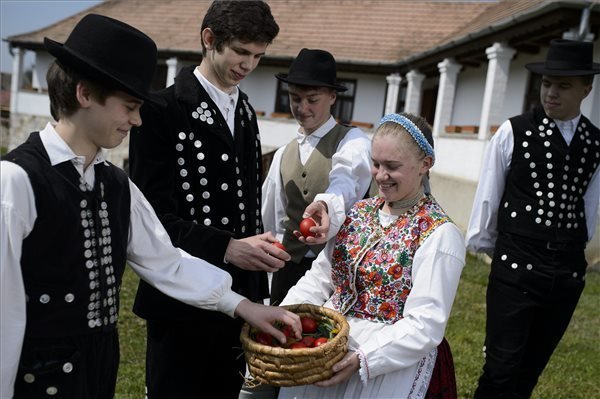 The second day of Easter is called “vízbevető hétfő” (thrown-to-water Monday) in some areas of Hungary, because this is the day of sprinkling. In former times young girls were dragged out by force to the well or the water trough and poured with a bucket of water, or taken by the creek and bathed. Men used to went from house to house to sprinkle girls while singing and rhyming, for which they got red eggs in return. Sprinkling originates from the ancient rite of fertility and purgation. The cleansing power of water in Christianity is linked to the christening ceremony. Sprinkling is a widespread custom even nowadays in a gentler form, boys and men sprinkle the girls with cologne generally; but mainly in the countryside, sprinkling with cold well-water is still common. Boys tell sprinkler poems this time. One of the oldest and most traditional sprinkler poems is the following:

This one is the most popular and simplest sprinkler poem:

(I was in a green forest
I saw a blue violet
It was about to wither
May I sprinkle her?)

The reward of sprinkling was and is still food and drink, mostly spirits, and painted eggs. Eggs are ancient fertility symbols, and the allegory of resurrection in the Christian Church’s symbolism and has been a sacramental since the 12th century. Before the spreading of chemical dyes, natural materials were used to color eggs. The eggs were painted with onion juice most commonly, but there were another methods as well – the peels of wild apple tree resulted yellow color, hemlock made green color and lentil made blue. 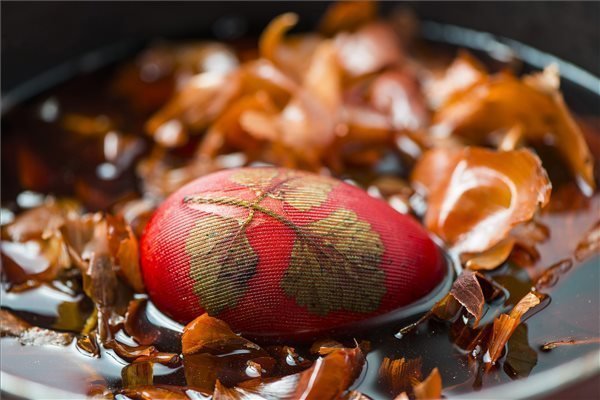 The method of egg decorating is waxing and scratching. With waxing, different patterns are drawn to the egg with hot wax, after it solidifies it’s put into painting liquid. After the paint covers the egg, the wax is rubbed off, and the patterns outline on the painted egg. Then it’s rubbed with a greasy cloth or with crackling to make it shiny. With scratching, the decoration is scratched with a pointed needle to the already painted egg. The decorating motifs can be pastiches of ceramics and embroidery patterns, geometric decorations or life pictures, epigraphs. On the western parts of the country, the painted eggs were used to drawn with acid. There are simpler methods as well, for instance when leaves are patched to the freshly painted eggs, and their veins give the pattern. Skillful smiths make shod eggs with soft metal decorations. Painted eggs can be boiled eggs or “blown out” eggs, in this method two little holes are punched on the two ends of the egg, and the inside of the egg is blown out. 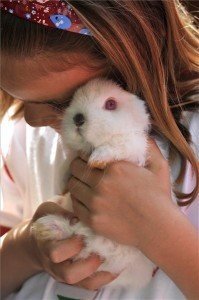 The Easter rabbit is a newfangled tradition, presumably originates from German areas then spread among urban citizenry and rural dwellers. Researchers say that the ancient relationship between eggs and rabbits is found in German mythology, in the legend of the goddess of the underworld which says that rabbits were originally birds, but the goddess transfigured them to mammals. Anyhow, the prolific rabbit symbolize fertility, as well as the eggs do. Children make nests for Easter rabbits before the holiday to which they lay the painted eggs. Nowadays rabbits bring not only eggs but other gifts too; giving gifts at Easter is a widespread tradition now similar to Christmas, but mainly for children. The most common question that every children hear after Easter Sunday: “And, what did the bunny lay for you?”