Vg.hu reports that, based on recent results, Hungary is still in an outstanding position concerning the number of people having secondary school degrees and diplomas. Here are the details.

In recent years, the educational attainment of women in Hungary has increased and indeed surpassed that of men, but it is still women who are in majority among those having lower levels of education. While in the 1960s, 80-90% of people with a university degree were men, by 2001, the discrepancy between men and women disappeared and now, women are in majority concerning the number of diplomas.

Based on the educational results of the Hungarian Central Statistical Office (KSH), it is brought to light that the biggest changes in education, including those affecting secondary and tertiary education, too, happened after the regime change. The number of those learning crafts and trades has quadrupled, the number of people with a high-school degree has tripled. Even the figure of Hungarians with a university degree has reached a sixfold rise in the last quarter of the century.

The highest finished level of education of people over 7, in 2016
/KSH/

As far as the number of those participating in university education is concerned, significant changes have been achieved. Compared to the 4.1% rate of university graduates in 1970, now this rate is 21.8% among the youngsters over 20.

Consequently, it can be stated that every 5th person in Hungary has a university degree while 2,700,000 people in the country have either general or professional baccalaureate. 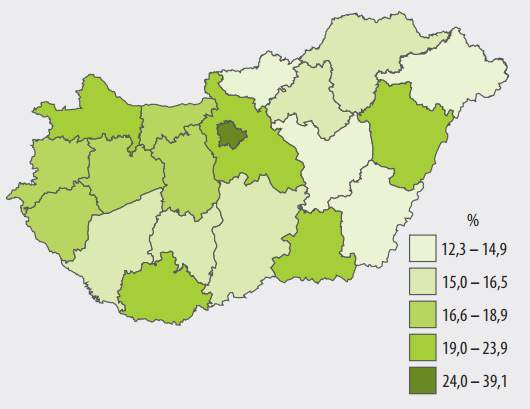 It is interesting to see that the number of those wanting to obtain a teacher certification has regressed since 2001. At the same time, however, the number of students continuing their studies in Social Sciences, Economics or Legal Studies has doubled between 1990-2016 making these fields the most dominant among other fields of studies. Another surprising fact might be that there are less people with Bachelor of Engineering since 1990. Although in 2011, it showed some increase, in 2016, their number was only around 19%.

Based on the results of KSH, Budapest has an outstanding position concerning the number of people with a diploma. Their number is almost twice as much as the country’s average.

As could be expected, this rate is 28% in county towns, 18% in other towns and 11% in smaller municipalities. Furthermore, in the capital and county towns, there are more people having high school degrees than in smaller villages, where their number still rests below the average. In Veszprém, Győr-Moson-Sopron, Zala and Bács-Kiskun counties, there are more people having vocational school degrees (26-27%), probably because of a much higher need for them, while in Budapest, their number is only around 20%. 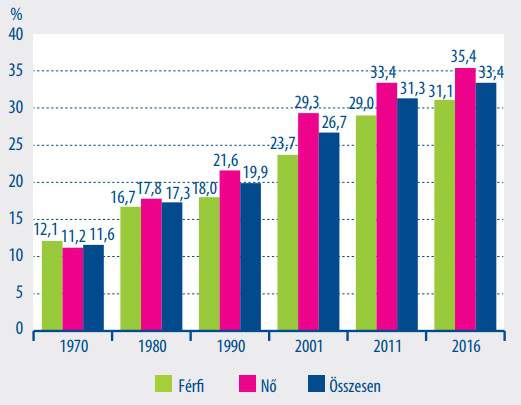 The number of men an women graduating from high school /KSH/

Finally, it is good news that the rate of those Hungarians with only primary school education is low in the country (17%), but this also includes those who are still not subject to compulsory schooling or those whose education is indeed in progess.

Another outstanding thing to mention is that, while 2,217,000 people had primary school education or lower level education in 2016, this result also shows a 5% amelioration since the 2011 census.