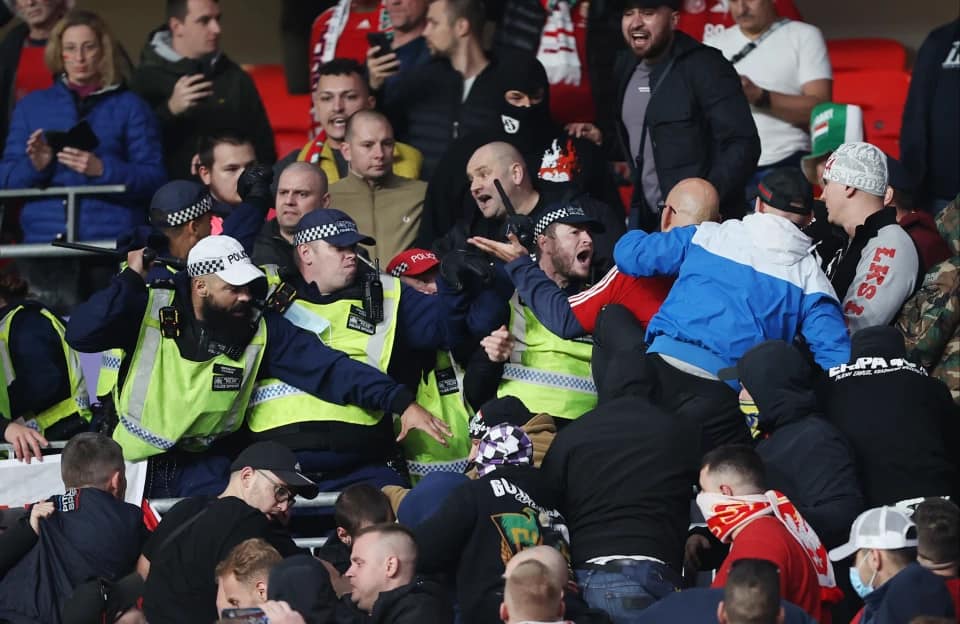 Yesterday was the first time since 1953 that the English team could not defeat the Hungarian team in London. However, the World Cup qualifying tie was overshadowed by a clash between the English police and the Hungarian fans.

Police shared why they used batons against Hungarian fans

According to the Metropolitan police, the fighting between their officers and the fans broke out when they attempted to arrest a spectator for a racist incident – goal.com reported. The police’s statement says that “shortly after the start of tonight’s match at Wembley. Officers entered the stand to arrest a spectator for a racially aggravated public order offence following comments made towards a steward. As the officers made the arrest, a minor disorder broke out involving other spectators.

Order was quickly restored, and there have been no further incidents at this stage.”

The Football Association (FA) promised to investigate the issue and would report the incident to FIFA.

The Metropolitan police increased their presence before the match. That was because they expected clashes between the approximately 1,000 Hungarian supporters and England fans.

in Budapest. “Objects were also thrown at players during that game, and a flare was launched onto the pitch”, – goal.com said.

As a result, Hungary had to play two home matches in an empty stadium. Furthermore, the Hungarian football association had to pay fines. During EURO2020, UEFA punished Hungary because of racism and homophobia.

What happened during the match?

According to mlsz.hu, a first-half penalty earned by Loic Nego and dispatched confidently by Roland Sallai put Hungary ahead against England in London. Although John Stones levelled the scores before half-time, Marco Rossi’s team were well worth their point in the end.

Today’s press said that the result was a surprise since Hungary has suffered only defeats from England since the legendary 3-6 played by the Mighty Magyars in 1953.