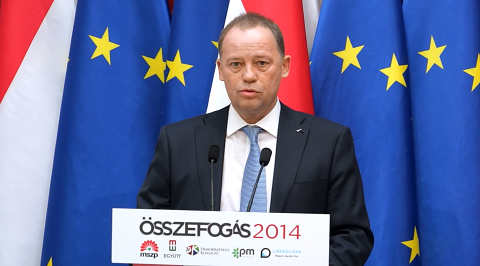 The Socialists will run on its own without be encumbered by an alliance, Tibor Szanyi told a press conference.

He listed among the programme’s major components guaranteeing an EU-level minimum wage and minimum pension worth net 100,000 forints (EUR 328) per month, while setting a 10 percent cap on the VAT of basic food products.

In terms of representation, Szanyi’s said it could be realistically hoped that the party would win 5-8 mandates, saying they would be satisfied with an outcome of over 30 percent.

Within the next few days, they expect to collect the 20,000 signatures required for the party to field a list for the EP election, to be held in Hungary on May 25, he said.

Szanyi said their campaign would be “anti-fascist” to response to the upsurge of the far right not only in Hungary but in several other European countries.

“There is only one movement against which we will be strong in our policy: radical nationalist Jobbik, a Nazi riff-raff … ” Szanyi said.