The traditional Hungarian cloth dye technique “kékfestés” (dye in blue) was put on the list, together with the Hungarian falconry, the busó festival of Mohács and the Matyó embroidery. Details about the technique and where to find products in Hungary below.

In fact, the dye in blue is a centuries-old technique in Hungary having been present from the 16th century. The process was done by using an indigenous dyeing plant being grown in huge areas in Thuringia and France which, after the geographical discoveries, was replaced by an Indian plant, the indigo. Since the latter is fadeless, more concentrated and has a better quality, it spread quickly in the 17th century – reported magyarorszagom.hu.

The expression of “kékfestés” appeared in the correspondence of István Bengely first in the 1770s.

An amazing cloth made with this technique. Photo: Wiki Commons By Elkagye

The technique consists of two work phases: patterning and dye. There is an insulating mass which was put on the pre-prepared white linen with the help of a wood pattern. After being dried, it protected the patterned surface from the paint. Afterwards, the cloth was dipped into a mixture of indigo, lime, iron vitriol and water and then it was dried in the air through which it became oxidised indigo blue. The different shades of blue cloth are the results of several immersions and airings. The insulating mass was soaked from the linen in an acid bath to fix the blue colour. The final result was the beautiful cloth patterned with white (in some cases colourful) on blue base. 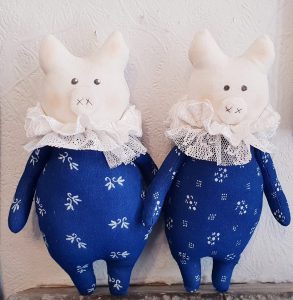 The traditional cloth dye technique played an important part not only in making folk costumes but also in furnishing. Today, many small businesses use the technique to produce, e.g. clothes and ornaments. Such workshops can be found in Győr, Szombathely, Tiszakécske, Bácsalmás and Tolna. In Pápa, there is even a dyer in blue museum about which we wrote HERE.