Flashmob for Africa at Heroes’ Square

Globoport.hu writes that the African-Hungarian Union (AHU) celebrated its 10th birthday on the 19th of August. The celebration continues in the upcoming weeks with exciting programmes for a wider audience. The AHU 10 programme series holds a flashmob at Heroes’ Square tomorrow.

This will be the first stop of AHU’s programme series. On Friday, September 9, they will commemorate the ten years of AHU by releasing balloons and by forming the Africa continent with human bodies. The organisers are happy to welcome anyone at the flashmob tommorow at 4 pm.

The birthday programme series will go on this weekend in Gödöllő. They will introduce Africa with music, dancing and a separate stand at the City Days. This will be followed by a film club together with chatting in Bálint Ház on the 16th of September, while AHU is also organising a fun family day for Oktoberfest at the end of the month in the Africa village with a concert by Mr. President. 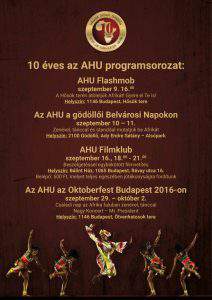 Click HERE if you want to read more about AHU’s 10 years!