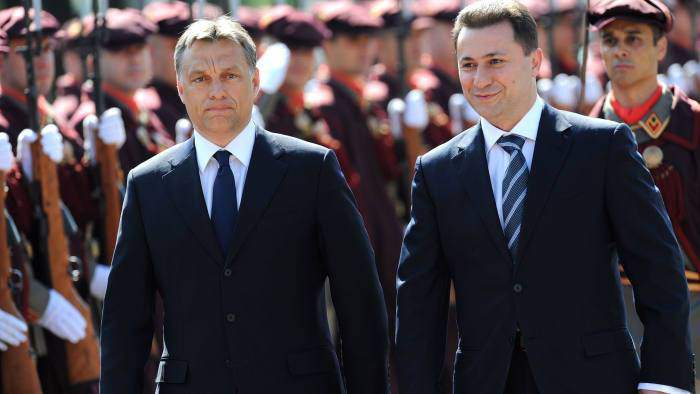 So far, he has been advising Hungarian Foreign Minister Péter Szijjártó. He fled to Hungary from Macedonia (now North Macedonia) because of a prison sentence for corruption and asked for political asylum in the fall of 2018, which he received shortly after. The former PM could even vote in the local elections of 2019.

According to 24.hu, opposition MPs tried to get information about why Hungary granted asylum for Mr Gruevski. However, they received an answer saying that he advises Foreign Minister Péter Szijjártó in Western Balkans issues. However, now,

The authorities registered I.C.I.C. Ltd. on July 15, and the owner and CEO are Gruevski. The company’s main activity is business consulting. In addition, there are several other categories on the list, such as organising conferences, asset management, or glass, detergent, and porcelain wholesale trade. Based on the information of 24.hu, even though Gruevski lives in Hungary,

he gave a Skopje address as the residence.

Gruevski graduated as an economist and worked at Balkanska Banka at the beginning of his career. Moreover, he was the first one who did a stock exchange transaction in Macedonia. Later, he was the finance minister between 1999 and 2002. He introduced VAT in his country and accelerated privatisation. That was when Matáv (today: Magyar Telekom) got hold of MakTel, the Macedonian telecommunications service provider.

He bought a Mercedes for HUF 200 million then, for which the local court gave him a 2-year-long prison sentence. He bought the armoured vehicle from public money, influenced the seller’s selection, and was charged with corruption.

However, the main reason behind his fall was that

he wiretapped every 100th citizen during his time in power.

When the scandal broke, 20 thousand people went out to the streets to protest, and Zoran Zaev formed a socialist government in 2017.

In 2020, he received a further 1.5 years in prison for inciting violence in a 2013 demonstration in Skopje. In 2018, he fled from North Macedonia and received political asylum in Budapest. As we reported before, the Hungarian authorities did not extradite him.

But why was he granted asylum almost immediately? It might be because he was the third member of the so-called Ohrid trio, which includes Hungarian PM Viktor Orbán, together with Janez Jansa, the Slovenian PM, and Gruevski, the former North Macedonian leader. Gruevski opposed migration and started an anti-Soros campaign long before Hungary did. Interestingly,

his party, the VMRO-DPMNE, is still the second-biggest party in North Macedonia.

Meanwhile, the North Macedonian authorities discovered that between 2006 and 2016, the former politician and his business circle collected a real estate portfolio worth EUR 1.5 million in the capital and Krusevo. The country’s public prosecutor now wants to confiscate the asset. Gruevski is suspected to have taken the donation his party’s supporters gave and to have bought real estate with the help of an offshore company registered in Belize. Interestingly, the case has a German connection, too.

A Bavarian Bundestag member, Tobias Zech, had to resign this year because he was charged with accepting money to lobby for Gruevski.

Based on the Ifimes Institute in Ljubjana, his political asylum will expire in October, but it can be prolonged, of course. The institute says that there is a chance Gruevski will return to North Macedonia after this year’s local elections.

Gruevski is hiding in Hungary, while North Macedonian court convicts him

Alfahir.hu reported in May that the German Der Standard said, referring to a high-ranking EC member, that they were astonished to learn: Hungary does not support the EU membership of North Macedonia. The news portal said that the reason behind the decision might be the Gruevski case.