According to magyartudat.com, hardly anyone remembers that once a great number of Hungarians were fighting for the Austro-Hungarian Monarchy on the seas—and underneath. Proposed by the admiralty, the Austro-Hungarian Navy ordered plans for the first submarines in 1906 from the Lake Torpedo Boat Company. These warships later successfully served the navy in several naval battle.

In fact, the Austro-Hungarian Monarchy was the last among the European superpowers to build a submarine fleet. The forces of the Central Powers were lagging behind, which is well illustrated in that the French Navy had 26 submarines operating and 20 under construction and the British Navy had 9 submarines operating and 21 under construction by 1905, whereas the German and the Austro-Hungarian Navy were only at the initial design stages by that date.

However, the breakthrough in expanding its naval force came in 1906, when the American Lake Torpedo Boat Company was commissioned for building the two U-1 class submarines. The naval warships were 100 feet long and as built were each powered by two gasoline engines while surfaced, and two electric motors when submerged. Shortly afterwards, the navy also authorized two U-3 class boats, U-3 and U-4, from the Germaniawerft shipbuilding company. Built by Whitehead & Co to the same design as the C class for the US Navy, the Austro-Hungarian Navy later purchased two U-5 class boats, too.

The home port of the Austro-Hungarian Navy was the naval base at Pola, a role it took over from Venice, where the early Austrian Navy had been based. Supplementary bases included the port of Trieste and the natural harbour of Cattaro at the most southerly point of the Austro-Hungarian Monarchy. Both Trieste and Pola had major shipbuilding facilities. The naval installations at Pola contained one of the largest floating drydocks in the Mediterranean. 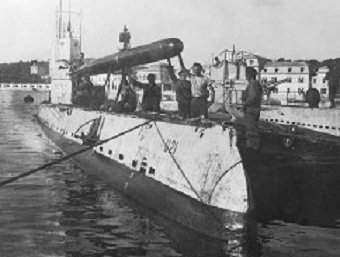 During the First World War, the navy saw some action, but prior to the Italian entry, the submarine fleet spent much of its time in its major naval base at Pola. After the assassination of Archduke Franz Ferdinand of Austria, however, the peaceful trainings were replaced by constant preparedness. On 15 May 1915, when Italy declared war on Austria-Hungary, the Austro-Hungarian Navy left their harbours in Pola, Sebenico and Cattaro to bombard the eastern Italian coast between Venice and Barletta.

Meanwhile, the admiralty ordered other submarines from the German, while also starting to put some emphasis on domestic factory development and production; therefore, the owner of Whitehead & Co established the Hungarian Submarine-building Company in 1915. Shortly afterwards, the Ganz and Partner, Danubius Machinery, Wagon and Shipyard Co. Ltd. also entered the industry and began the production of submarines in Budapest. Until the end of the war, no fewer than 13 submarines were built in the territory of the Kingdom of Hungary.

The submarine fleet proved to be a match for the Entente naval forces in the Adriatic. In addition to triumphing over several warships, it defeated transport ships, too. Among its number of great successes should be emphasized that the fleet successfully forced an enemy submarine to surrender on 20 December 1914, which was subsequently served the Austro-Hungarian Navy under the name of U-14 until the end of the war.